In Search Of The Unknown: The Illustrated Story of a Doomed Expedition

One of the things I loved about the classic TSR D&D adventure modules were the illustrations. It always seemed to me that the illustrators would tell a tale of the dungeon delvers within the pages of the module; tales of treasure, monsters, dangers and death.

Many player's first module adventure was B1 In Search of the Unknown and the tale told in those David Sutherland III illustrations is of classic D&D flavor.

You'll see that we have our trusty wizard, complete with pointy hat, along with his young and inexperienced adventurer seeking men of arms to delve the mysterious Quasqueton in search of Zelligar the Unknown's mystic secrets! Yes the risk is great but the challenge cannot be ignored!

Having banded together a diverse group of adventurers and with spirits high, the party sets off to find the fabled 'Q' on the wizard's map. What can possibly go wrong with such a hardy group such as this? Archer? Check! Dwarf? Check! 10 foot pole? Check! Note the full fantasy flair of the shining knight and the fairy castle. Ahh, those first few years of of RPG innocence.

After days of travel and searching, a heavily forested hilltop pokes through the trees and a lone watchtower is spotted. Could this be the fabled Quasqueton? Note that this little remembered fact about a watch tower has, surprisingly, never been expanded upon from any one of our creative Grognards.
UPDATED: Restless corrected me on this assumption and posted this link to the tower. 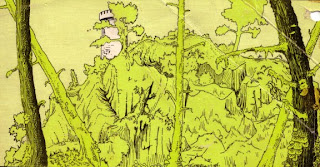 An initial foray into the chambers and corridors under the mountain reveals some tantalizing trinkets but, alas, the treasure was but an illusion broken by a touch of the hand.

Upon seeking the exit, our first group of adventurers discovers a most extraordinary find. A chamber filled with a rainbow of molds and fungi! What wonders this deserted stronghold hides. Tomorrow a delve deeper into these depths! 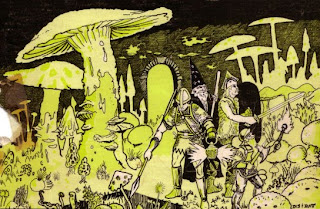 The second foray into the mysterious stronghold of Quasquenton unveils more of it's mysteries! A wizard's laboratory! A cat suspended in a jar? Wait! Don't open that!

A wrong turn and our party is trapped! Strength alone will not save them. 'Tis the skills of the tiny halfling who escapes and finds the trigger to open the portcullis. 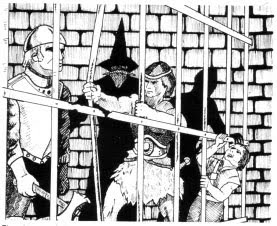 Out of the shadows battles are fought. Our party is whittled down to four souls. More corridors explored and doors opened. An expansive room filled with mysterious pools. What's that sound!?!

More horrors wandering the halls! Down to only three now. Give up? What of Zelligar's secrets? Just one more door..... 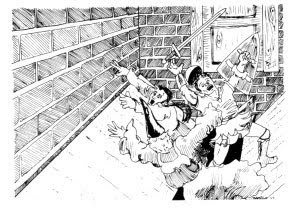 Plummeted to the caverns below, trapped and hopelessly lost, the party faces horrors unimagined! One by one the warriors all fall until the lone wizard is left searching in vain for the way back to the surface. Doomed to his fate the wizard faces his final foe!

Okay, so a TPK. What more did you expect from a bunch of 1st level explorers?
Posted by bliss_infinte at 11:48 AM