This past Saturday, over at Lamentations of a Flame Princess, I learned that screenwriter Dan O'Bannon passed on. I grew up with many of his films including Alien, Heavy Metal and Dark Star, which he made with John Carpenter and Ron Cobb (set designer for Conan the Barbarian). He was one of the first handful of film creators that I began to follow during my formative years.

I begged my parents to take me to see Alien back in '79 and that movie scared the pants off of me! It continues to be, IMHO, the greatest Sci-Fi horror film ever made and sets a bar that has yet to be surpassed.

This brought to mind a little game that I enjoyed playing back then called Intruder put out by Task Force Games. The game was based on the Alien concept of an Intruder on board a space station that goes through metamorphosis and becomes more powerful and harder to kill (possibly even cloning itself) as the game goes on. It is a race against time as the Intruder becomes immune to the weapons that the members of the crew have or can build. And to make matters worse, all the animals from the science lab have escaped making that much harder to track down the real Intruder!

This was a great little game, one of many from Task Force Games that I played back in the day. Simple to play, very fast paced, and filled with enough randomness to make every game a unique experience. If things looked bleak, you can even escape on one of two shuttle crafts, but watch out, the Intruder may have hidden aboard! 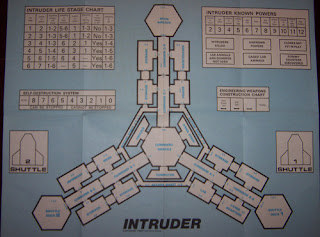 It was a thrilling little game inspired by a great film written by a very talented screen writer. Dan O'Bannon will be missed by his films will always inspire.
Posted by bliss_infinte at 7:53 AM