Session LVIII: Into The Tower

Our Fearless Adventurers
When we last left our brave heroes they had finally pieced together the last key and opened the door to the base of the tower.  But no sooner than they had finally gained entrance to their goal that their army of soldiers all fell to the ground in a slumber.  Behind them, down the wide hall was the woman they had 'rescued' from the ogres who had come back to them as a witch!

As the party rushed this feeble looking woman she blasted them with a cone of frost just as Maximus cast a hold person spell on her.

With all the soldiers dead, including Captain Vanir and Christopher mortally wounded, Arg and Wolf butchered the witch who turned out to be an Ogre Mage!

Finally entering the tower's base chamber, they found only a number of soft reclining chairs.  But as they were deciding to sit upon them, the door slammed shut and some magical force pinned them to the ground.

Once the disorientation and the magic dissipated, they found that a hole had opened up in the ceiling that wasn't there before.

Arg tossed the Halfling up into the hole to find what he could see.  Skwanky discovered that about thirty feet into this hole were rungs in the stone.

Gnarly turned himself into a raven and flew up the hole and discovered that it opened up into a spacious chamber filled with a moist air and fog.

Tying a rope to the rungs, the wounded party climbed up into the mysterious chamber.  Blindly exploring, they eventually came upon a wall following the slightly curved wall for a way they were attacked by a vicious Heiracosphinx.  Killing the beast in a bloody battle they found it's lair in a pile of rubble and looted some treasure.

Not far from the lair they found an iron spiral staircase climbing into the whiteness.

As they ascended the stairs they were attacked by a trio of petranodons, which after some hack and slash they dispatched.

Climbing the stairs they entered into a heavily forested chamber.  Following the trail they were ambushed by a deadly Su-Monkey who was joined by two others.  After a horrific battle which left them all near death, they continued through the enclosed forest and came upon a rose garden tended by a hooded gardener.  As they got the gardener's attention, she turned around and removed her hood to reveal that she was a Medusa and turned three of the party to stone.  Slaying the deadly Medusa and rescuing their companions with a scroll looted from the Ogre Mage, they continued through the forest to discover another iron staircase rising through the ceiling.
They found themselves standing upon a stone landing with paths leading from it all above a lake of fire.  Opposite of them, guarding another staircase upwards stood a fire giant who proceded to pick  up a large bolder.  But as the Halfling charged around the stone path to face the Giant alone, the party was attacked by elemental fire bats.

As they fought these mystical sprites they noticed that the Giant just stood his ground and didn't try to attack them by throwing boulders.

With the fire creatures defeated they stood across the grand hall facing the Fire Giant who goaded them on.  They talked with the creature and discovered that he was a servant of the Heart of Invernese, the power that built this tower and what is controlled by Zadir the Stygian wizard.

The giant was guarding the entrance to the higher levels of the tower.

After a parley where they tried to get the giant swayed to their side, the badly wounded party thought it best to head back down to the forested room and lick their wounds for their coming battle against the Fire Giant... 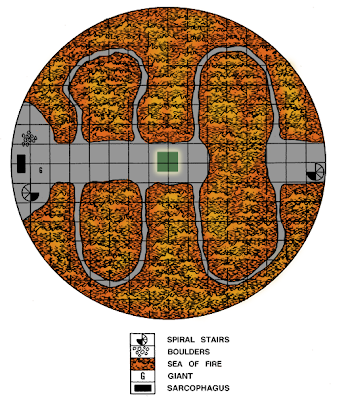 The party at session start:

Having navigated the mysterious chess board room, the war-weary party continued down a passageway which took them to a bubbling fountain of what appeared to be clear water. Examining the water but wary of all the other deadly traps throughout this complex, it was decided to avoid drinking the water (although Skwanky the halfling was already splashing around in it) and continue down the hallway.

At the end of the hall they found another dead end with the indentation in the shapes of two keys they found.  Not having found a key in their current section, they decided to back track to seek it out.

Once again, standing before the statue outside of the chessboard room, Arg give it a "high-five" and a panel opens within it's chest revealing the third piece of the key!

Leaving the tunnels beneath the wizard Zadir's tower and with everyone seriously wounded, it was decided to head back into town to heal up.

With dawn breaking and the battle for Caladan wrapping up, our weary group of adventurers went their separate ways with some heading back to the Temple of Mithra and the Cloven Hoof.

Healed, rested and fed the party regouped at the final entrance to the basements of the tower.  Zadir is still nowhere to be found and Baron Blackmoor and his bannermen stood guard waiting for the Stygian to show his face.

Again, with some additional soldiers, the party descended beneath the surface in search for the final part of the key to open the final barrier to the tower.

The first chamber they find is one shrouded in shadow with an odd shape upon the floor. The halfling trots into the dim room where no light can cast off the grey shadows and found a body with a dagger in it's back.  Upon removing the dagger, it leaped out of his hand and attempted to stab him in the back.  The quick thinking halfling lifted the dead body upon his back and used it as a shield against the enchanted dagger - which worked as the dagger once again stabbed into the back of the already dead victim and ceased harassing the tiny warrior.

Continuing on, they found a cocoon which they cut opened.  Inside was a body with a terrorized look upon it's face.  Robbing his boots, the large half-orc found that they allowed him to fly!

The next chamber brought them to a very larger hall with an army of Bugbears standing perfectly still.  As Arg and Skwanky passed the threshold, the Bugbears became animated and attacked the party.  Creating a bottleneck within the doorway, the party easily hacked the Bugbears into a bloody heap.

In the expansive hall was a large stone sarcophagus which held treasure and the final piece of the key!

Continuing on they came across two ogres seemingly torturing a beautiful peasant girl.  Dispatching the ogres and rescuing the woman, they sent one of the soldiers to escort her back to the surface as they proceeded into the tunnels.

Finally, facing the polished door with the four pieces of the key, Arg joins the keys together and places them into the indentation.  A line appears going down the two halves and the doors suddenly spring open revealing a chamber inside.  Suddenly, all of the soldiers collapse onto the floor, asleep.  Turning around they party sees the rescued woman with eyes afire, the soldier her slave.... 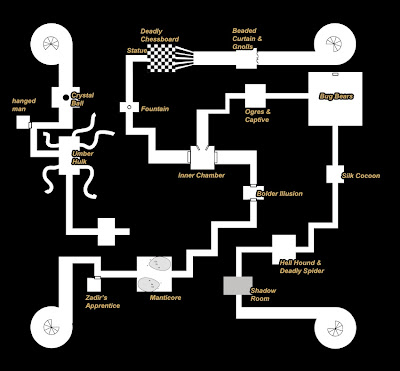 Posted by bliss_infinte at 8:24 AM No comments:

I've got a few sessions to catch up on so here goes....

The party now consisted of a large number of NPCs; soldiers from the battle for Caladan, a handful of Gnarly's Mushroom-Men, a couple of priests good and bad and Blackmoor's captain, Vanir.  It was quite the unwieldy lot!

But these numbers didn't last too long as the party continued the exploration beneath Zadir's magical tower.  The next chamber they came across was a large open hall with a number of tall rugged cave like openings.  There was also a chest in the corner of the room which Skwanky immediately ran over to.  As the rest of the party stood guard, suddenly there was a rumbling and as a portion of the wall collapses out comes a raging Umber Hulk! 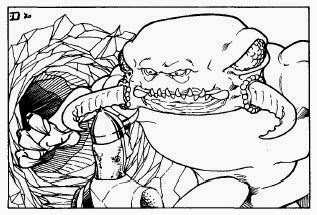 Due to it's gaze attack many of the party were in a state of chaos either battling each other, standing in awe or just wandering off.  Not all of it was bad though as some of the confusion lead to the death of the Umber Hulk, though a good half of the party was killed including all of the Mushroom-Men and Skwanky had wandered off deeper into the dungeons.

Gnarly and Tuk the owl went off after Skwanky while the remainder of the party searched the chest and found piles of gold and another piece of the odd key to open the inner chamber entrance to the wizard's tower.

Gathering the treasure and meeting up with Gnarly and the dazed and confused Skwanky, they discovered another chamber, the floor glistening with moisture.  This turned out to be some Grey Ooze which the party thoughtfully avoided and headed back to the surface to explore the third underground entrance.

This third staircase lead them to a chamber with a beaded curtain that was impossible to part.  After much thought, Arg just ran full speed through the curtain and passed through.  On the other side, however, he was ambushed by a pack of Gnolls!

Further down the hallway they found that it ended with weird human-like impressions in the wall.  Testing these with the dead bodies of the Gnolls, it was discovered that these portions of the walls spun around and disappeared down a passageway. With no other option but to move forward through these odd transporters, each member of the party stepped into a different impression and was swept off into another chamber - a chamber with a large checkerboard pattern on the floor and a statue at the other end.  As some of the party carefully moved across the checkerboard pattern they were able to make it to the other side with minimal affect while others, for some reason, were shocked to near death by apparently stepping on the 'wrong' pattern.

Gnarly, being a wise druid, changed into a bird and flew across the hall without any ill affect.

The badly wounded party was on the other side of this deadly trap facing another hallway into the unknown...

The party at the end of the session:

Posted by bliss_infinte at 8:45 AM No comments: