Nearly caught up with our session recaps, so read on....

With first brave torch-bearer, Gygash Graves the gravedigger, slain by ambushing orcs, the wounded and weary party thought it best to head back to the surface and rest for the rest of the day.

Working their way back through the tunnels, they ascended the stairs back to the surface only to find that a Chimera had attacked their camp, and was eating one of their horses.  With no current way out, the party rested upon the uncomfortable stairs.

Afterwards, the party continued exploring the first level.  However, Larton, not wanting to leave behind a fellow villager, insisted on carrying Turwick's body through the dungeon until a proper burial could be performed.

Exploring some rooms they fought a giant snake and some giant weasles.  The party came across another stone coffin wrapped and locked with chains, much like the one they found earlier in the dungeons.  Needless-to-say, they gave it a wide berth.

Retreading already explored passages they had mapped on an earlier foray into the Underworld, the party was determined to explore every corner of this level before delving deeper down one of the many stairways or hidden passages leading down, slaying patrolling orcs along the way.

Eventually they entered a room full of giant rats which they slain with only Turwick the Distasteful hireling killed in the process.

Beyond that was discovered a chamber with a demonic statue missing a hand that would be pointing at the door.  Perplexed by this strange object, they let it be for the moment and retraced their steps back through the bodies of dead rats.  There they found that the bodies were being scavenged by some underground dwelling Morlocks.  They befriended the Morlocks and the two groups went their separate ways.

The last room the party discovered was a closed chamber with the skeleton of a deceased Magician and a more recent carcass of a pack mule.

They thought this would be a good place to rest....

Seriously.  They thought that.
Posted by bliss_infinte at 10:00 AM No comments:

A note from the Warlock
Still catching up on our session recaps with just two more to go. .

The next morning, the party thought it best to head back to the town of Berkinstok and hire some 'muscle' to help explore these dungeons.

In town they sought the help of the Innkeeper of the Hacky Shack to spread the word that work was to be had exploring the dungeons beneath Xlarthan's ruined tower.  Eventually they interviewed  a number of locals including Gygash Graves the ol' grave digger, and Larton a young adventurer to be.  They also hired Turwick, a veteran. Hearing that there was money to be made, the mercenary Biggs, who helped the party fighting the Big'uy back in the caves of Brushwood joined the party as well.

While a blizzard postponed their journeys they sought the aid of a local magician, Mystor, in identifying the Mindshiv blade recovered from the White Apes dwelling deep down in the dungeons. Mystron took the sword and only asked for any magic items they find as payment.  He also sent his apprentice, Cray Rouis, along to aid the party in that regard.

After a few days delay, the party, now equipped and reinforced and ready for anything, headed back out into the wild Gimm Hills and soon came upon the entrance to the dungeons once again.

Delving into the Underworld once again, the party explored and mapped their way through long passages and empty and looted rooms being very cautious.  Extremely cautious.  They came across a single copper coin which they let Graves pick up.  He was more than excited to have found his first 'treasure' on his first adventure.

After coming across a number of dead ends and unfinished construction the party found a room with a bubbling fountain.  They send Graves in to test the water (having had bad luck with 'wet stones' and fountains in the past).  Graves found the clear and fresh water quite refreshing!  What a brave soul!

Exploring some side passages they came across a nest of Zombies which they turned and dispatched quickly.

At this point in their exploration, however, their map became confused and they retreaded mapped passages and became slightly lost.  It as at this point that out of the darkness arrows came whistling by!  Trying to hide down a side passage they found it all to be a trap and were ambushed by Orcs!  Edan and Thenus charged the missile firing Orcs hidden in the fountain room while the rest of the party battled the ambushing Orcs in the hallways.  It is here that the brave Gygash Graves fell! 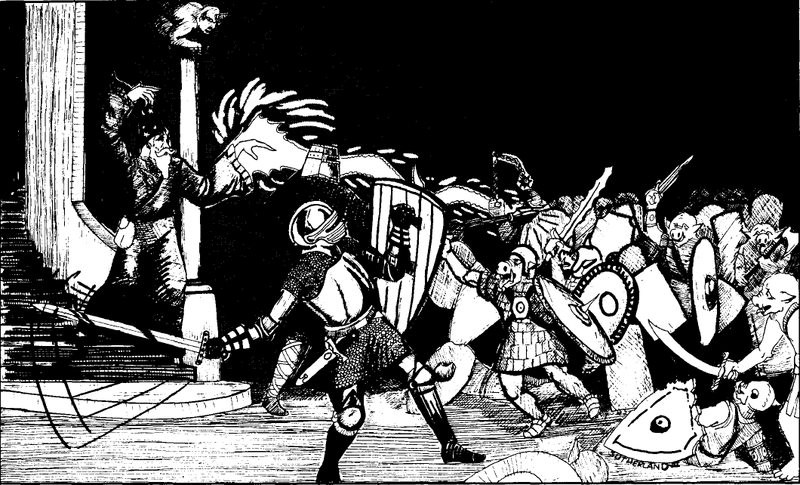 With the Orcs dispatched and the party fairly wounded, they continued to explore a side passage, with Larton, unwilling to leave the dead body of the Grave-digger behind, carrying the corpse.

In this last chamber they discovered a stone coffin wrapped in chains and locked tight.  after long debate about whether to unlock and open this coffin and unleash whatever horror lay inside or to just let it be, it was decided to let it be and make their way to the surface to deal with the body of their dead companion...

Posted by bliss_infinte at 10:00 AM No comments: