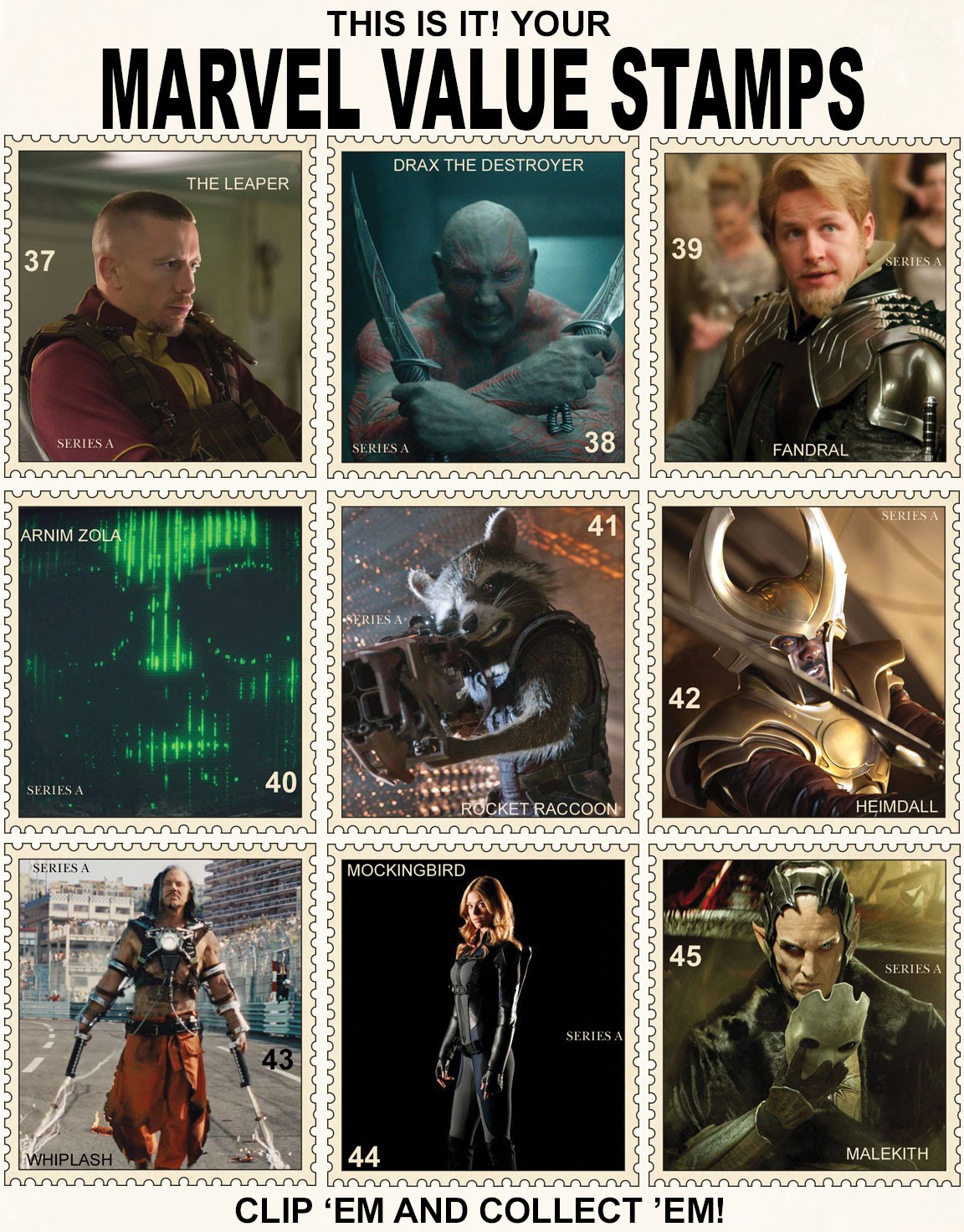 More Value Stamps here and more to come...
Posted by bliss_infinte at 8:43 AM No comments: 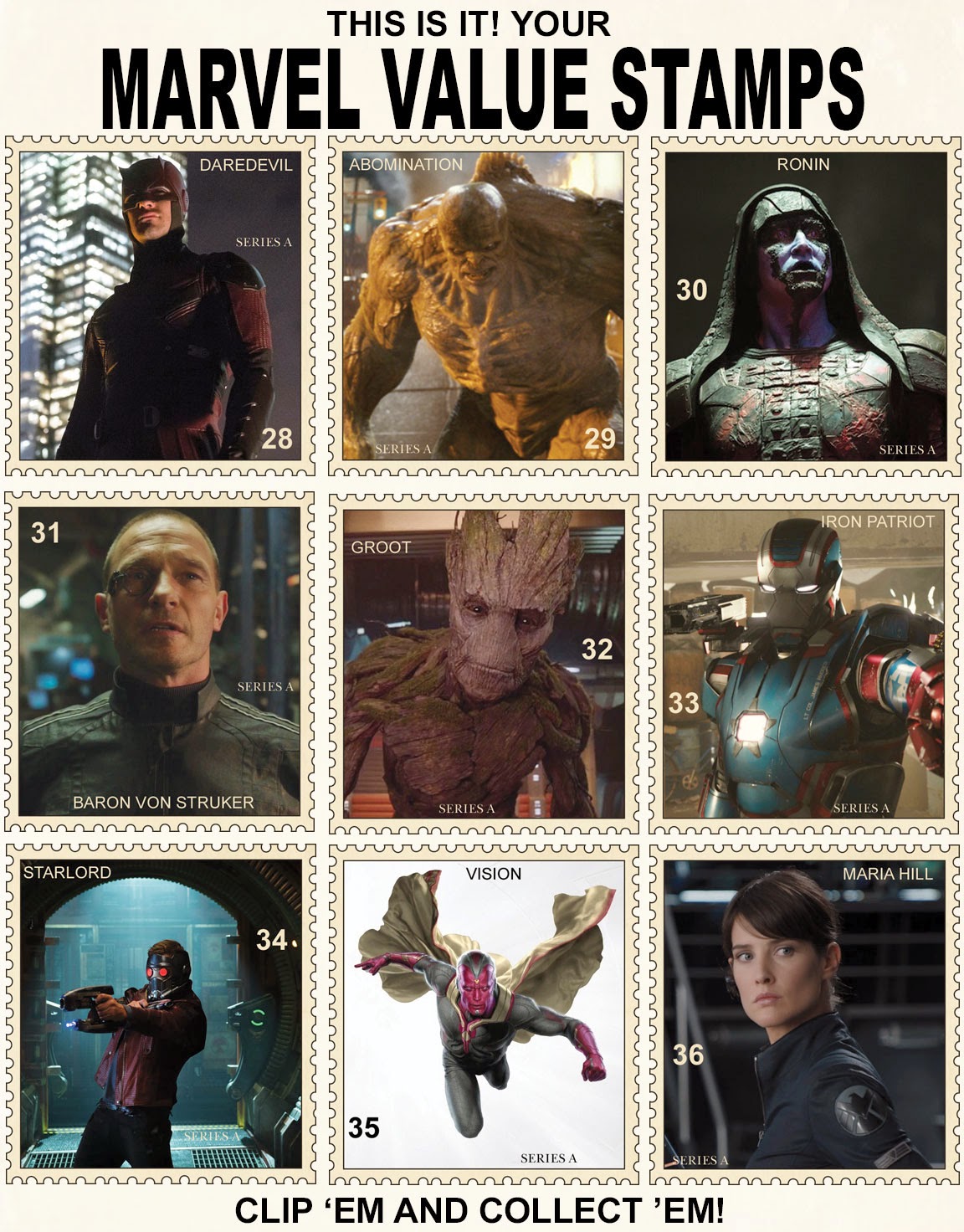 Yeah, the MCU is getting pretty extensive...
More Value Stamps here and more to come...
Posted by bliss_infinte at 8:37 AM 1 comment: 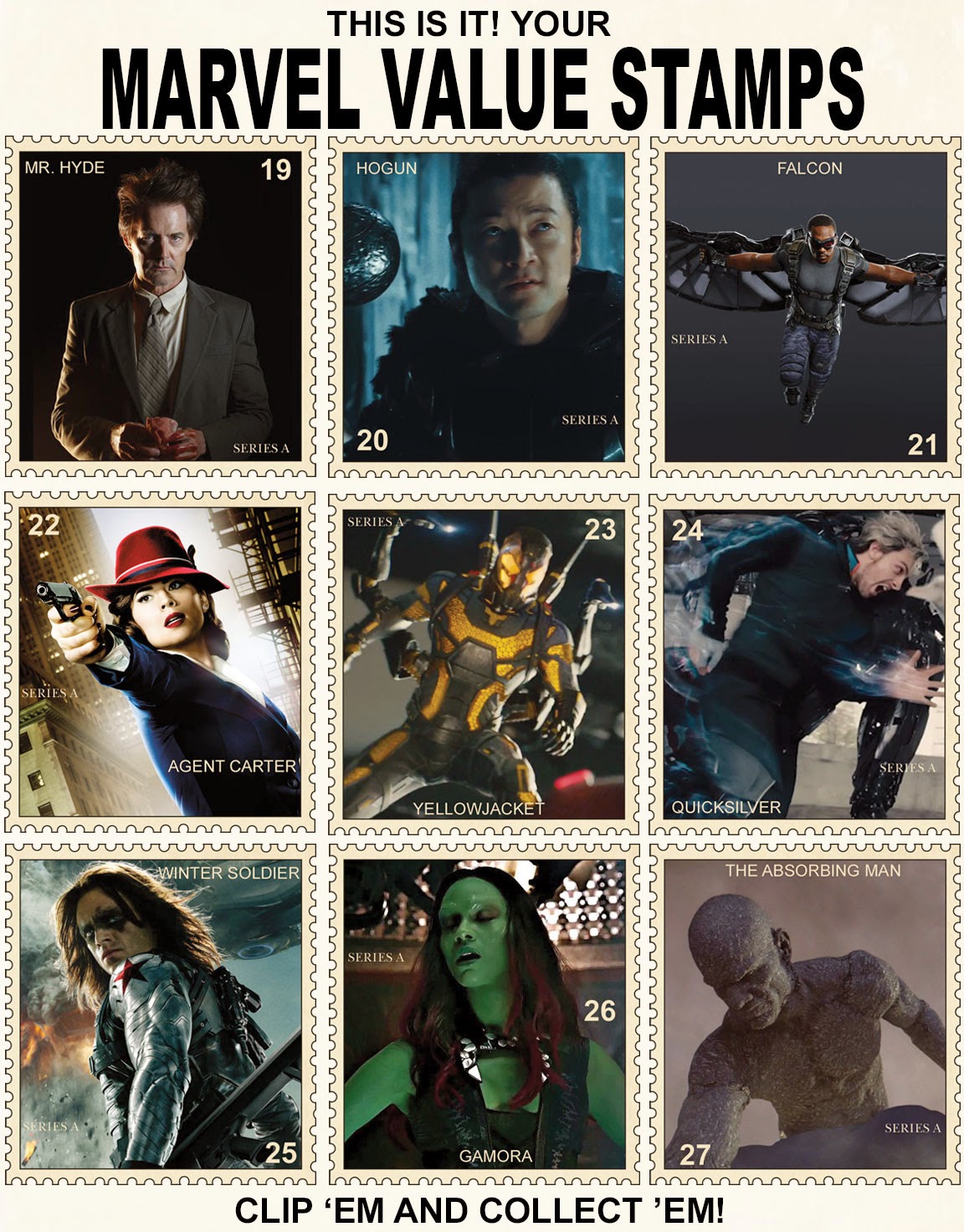 View all the stamps here.
Posted by bliss_infinte at 8:26 AM 1 comment:

With the intention of keeping their surprise on the Hobgoblins the party makes their way deeper into the lair.  Seeing some young Hobgoblin guards in a distant chamber they charge them killing two of the young ones while two escaped through a door.  Torvin kicked the door in to find a large pillared hall filled with Hobgoblin women and children and the two young warriors warning the warriors of their clan who immediately attack the part.  But the wizards in the party are quick and put most of the warriors to sleep (damn magic-users).  The rest of the Hobgoblin warriors engage the party and a bloody and confusing battle ensues with females and children running around in a panic.

As these warriors fall, more burst into the chamber from another doorway including some big hulking ones.  These newcomers are dealt with in a shower of blood and guts.

With all the Hobgoblin warriors slain and the females and the young ones cowering in the corner, Cantari and Thenus slit the throats of the ones sill in an enchanted sleep.

Exploring deeper into the lair the party comes across some now empty living chambers and a locked door.  Centari unlocks the door with his magic.  Inside is a chamber filled with rich fabrics.  But beneath the fabrics is found the real treasure; a locked chest!  Torvin, the rash dwarf, smashes the locked chest but the chest was trapped with poison gas and Torvin Fulvousmith dies a horrible poison inflicted death!

Wanting to rescue the dwarf from permanent death, the party decided to hurry back to town but not before going down a few levels to retrieve their hidden treasures, which they do. But on their way back through the hallways they come across a statue of a half-naked halfling in the hallway where there once was none.  Peeking around they are attacked by a Cockatrice!  Minimus fights off the feathered beast and soon it is slain by the hand of Biggs.

Trying to revive the petrified halfling, Minimus tries to wash the halfling in the blood of the Cockatrice and it succeeds in reviving the little on (why not?), who turns out to be none other than Skwanky Furrytoe still in possession of the Soul Gem (last seen waaay back in session 59 & 60)!

With the halfling and treasure in hand the party works their way back to the surface (good map making helped a ton with this!).  There they found their cart turned over in the snow, the results of an attack by a Chimera on their camp which ate and scared off their horses.

Turning the cart over, they piled their treasures in it and pushed the cart through the snow and back towards Berkinstok.  But one day from town they are attacked by a giant Roc swooping down from the sky....!
Posted by bliss_infinte at 9:00 AM No comments: 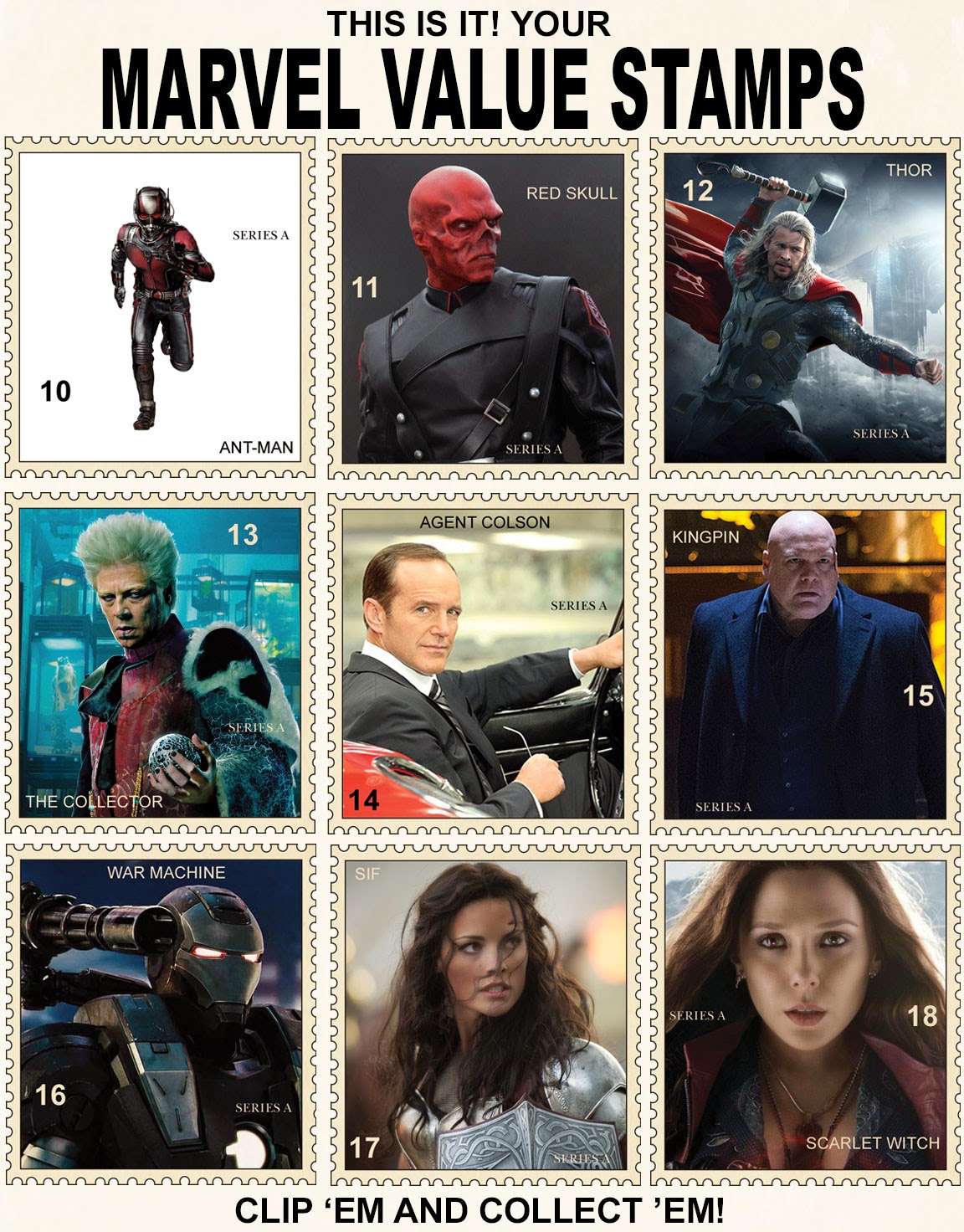 Second group of the MCU Marvel Value Stamps.
Posted by bliss_infinte at 1:01 PM No comments: Who would have thought growing up in the 70's (and 80's) for that matter that we would be seeing these Marvel heroes brought to the screen in such an authentic and successful fashion?  I never did.  That's why I love, love, love these Marvel movies.  Back in the 70's Marvel use to put these 'collector' Value Stamps in the back pages of their books.  You were meant to cut them out of your comic and collect them in a book.  I never did that but you could not miss those stamps with every Marvel hero is some icon pose.  Now-a-days telling someone to clip something out of their comic book would be blasphemous!  But back then, for .25¢ or .30¢ you'd get the good ol' newsprint comic that, yes, you would occasionally mark up and cut them up.

Yesterday I worked up the Captain America one.  Then I thought it would be amazing and fun to see just how many of these characters have been brought to the screen in a bit way.

Something that I'm toying around with. 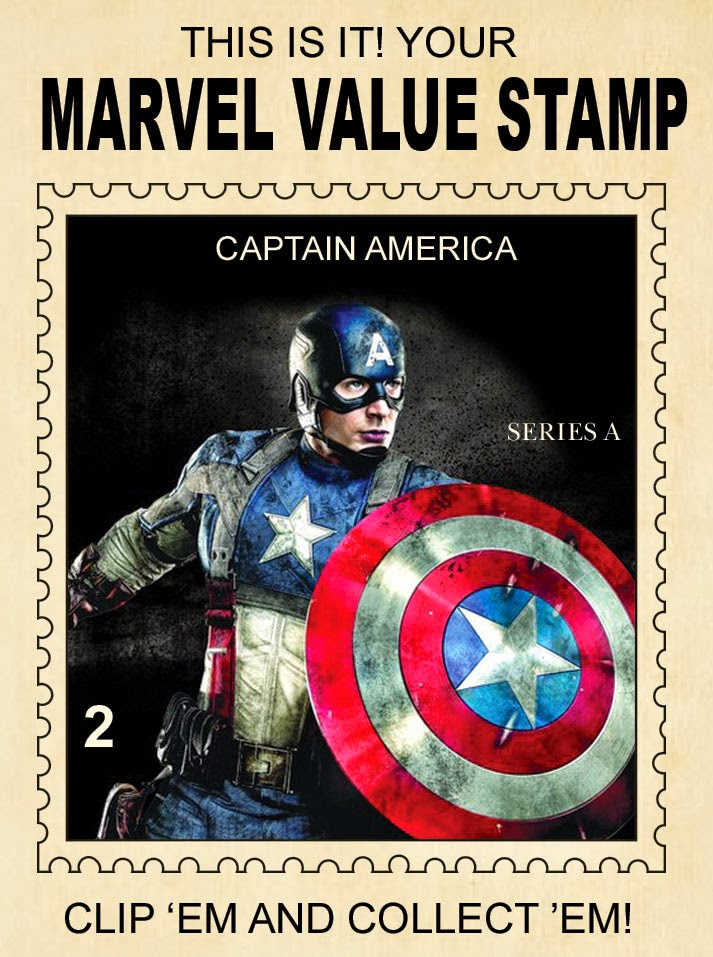 I just love these Marvel movies.  Having grown up with these characters on the comic pages I'm more than thrilled that they've been making these movies.  I don't read the hero comics much these days but these movies have filled that gap.  I look forward to each installment as I did a new monthly comic back in the day.  Back in the 70's Marvel use to put these 'collector' stamps in the back pages of their books.  I guess they were meant for you to cut them out.  I never did.  Now-a-days telling someone to clip something out of their comic book would be blasphemous!  But back then, for .25¢ or .30¢ you'd get the good ol' newsprint comic that, yes, you would occasionally mark up and cut them up. 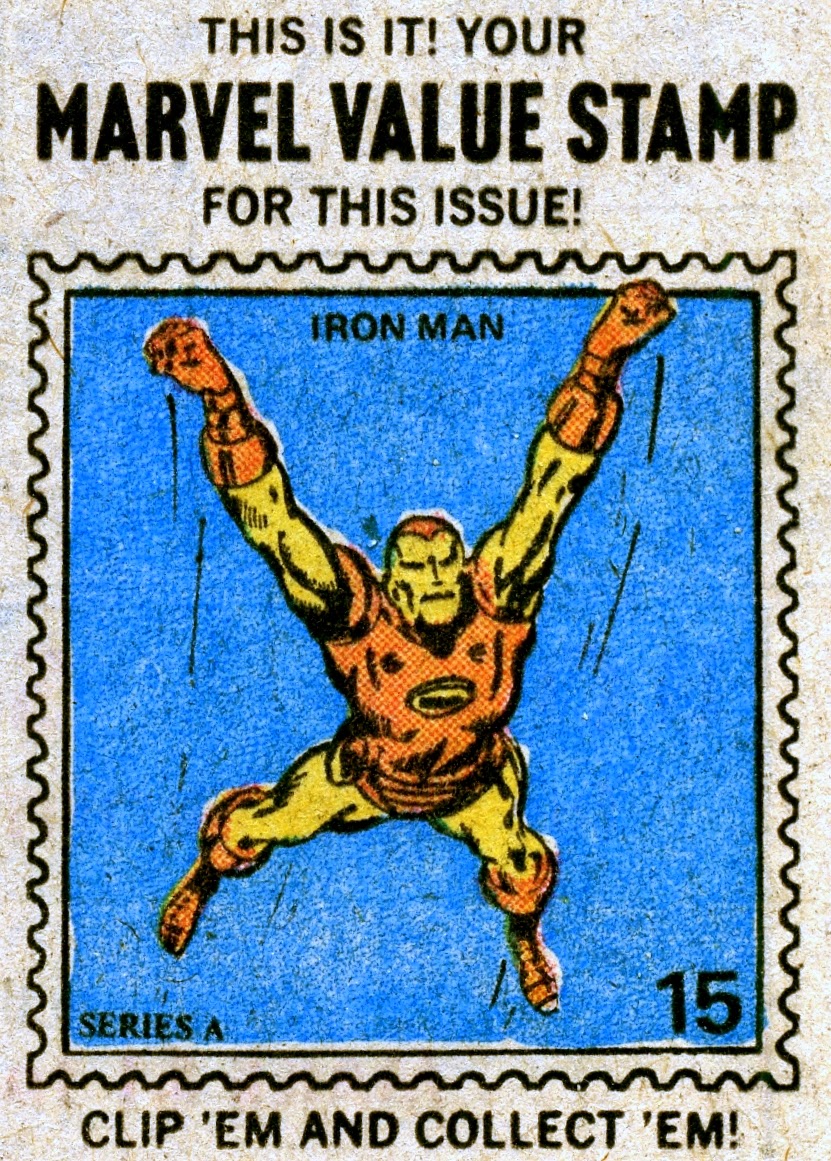