For over eighty years, the Warlock lurked in his tower of stone, crafting all manner of trinket and bauble for the many curious novice and veteran travelers that had passed through his portal.

Often, the Warlock would narrate his many wild tales of Swords and Wizardry chronicling the many heroes to have crossed his path to those that would stop by and listen while having a smoke of the ol' pipe-weed and a sip of sweet mead, home-brewed by the Warlock himself. Some say that the Warlock would enchant his brew with a magical reagent said to be none other than the poisonous Black Lotus, used in such a precise portion with which t
o grant one's mind the key to unlocking the door to the veiled world.  This would leave those that partook in the sweet nectar with a sure-foot on the path and spirits lifted.

Throughout the many seasons, the Warlock had shared his craft with those who traveled on the same mystical path. Alas, there came a day when the tower grew dark, and the vines once speckled with sweet scented flowers withered and died, and the ancient stones decayed and fell to ruin.  The Warlock had vanished without a trace.

The gears of time ground on and the tower remained vacant.  Those same curious travelers searched the tower for trace of the Warlock and his fate but no clue was found.  Only rumor and conjecture now filled the minds of traveler and peasant alike.  Some say that a hidden passage had been found leading to tunnels beneath the tower itself. It was in these tunnels that the Warlock may have discovered other mysteries and portals and had left this mortal realm behind and met his mysterious fate.

These rumors proved too tempting for some as explorers entered the tower to pilfer some left behind treasure.  Some, however, never returned at all.

The ruined Warlock's tower still stands to this day, inviting those that wish to explore the maze of tunnels for tales and treasures left behind.
Posted by bliss_infinte at 4:37 PM No comments:

Session XCIII: One Pissed Off Dragon!


Current Player Characters:
Thenus (Ranger)
Wang Du (Monk)
Wolfheir (Viking)
Arg (Half-orc)
Sir Gwain (Paladin)
Su (Cleric)
Grop (Kobold Wizard)
Tadashi (samurai)
NPC
Koshan (Ogre-mage)
After having infiltrated Agatheron's lair and defeating his army of Fire Giants, wounded and weary, the party made their way back to the village of the Firbolgs.
With the power of Mithra, Su brought Wang Du back from the dead.  Through his travels in the Realm of Death, Wang returned more powerful than before to face his destiny with Agatheron.
Resting and recuperating in their hidden village of stone, the party began to make plans for their final assault on the Ancient Dragon. Some, such as Thenus, even questioned why they should risk their necks in the first place.
Lord Boomish, who fought Agatheron along with Baron Blackmoore many years ago, died from his wounds and old age. The Boomish family shield was given to Sir Gwain.
However, on the third evening, a fierce rumbling was heard throughout the canyon and the Flaming Pass.  In the skies above the mountains, a sight not seen for nearly 80 years; the fearsome and massive Ancient Red Dragon, Agatheron, flew off in a fit of burning rage heading to the foothills and the village of Litafjord.  From a distance they saw the the dragon raze the village to the ground, undoubtedly killing the remaining innkeeper and his dwarven wife.

With a bone-chilling and wrathful roar echoing in the mountain canyons, they saw Agatheron rise in the air and fly south towards Berkenstoke and Blackmoore...
There was much debate as to whether take advantage of the Dragon being gone to plunder his treasure and set a trap or to continue healing.  Arg and Sir Gwain were persuasive and the party departed for the fortress once again, leaving the recovering McDagger, Biggs and Lothar behind.
Once again at the entrance, they saw it was guarded by a Fire-giant and his Hell Hound.  Without waiting, Sir Gwain rushed out and charged the Giant who let loose his beast.  Thenus fired arrows at the giant and wounded him as Arg, Wolf and Sir Gwain hacked first through the Hound and then the Giant.

Entering the hall once again, they were soon surprised by two more Fire-Giants hiding in alcoves and firing Balistas.  The party splits and attacked their foes. Arg, Wang and Wolf attacked one giant while Sir Gwain and the rest of the party attacked the other.

After the battle, there were two more dead Fire Giants and some wounded party members.

It was decided to explore the rest of the alcoves in the great hall and then hunker-down to rest through the night to recover from their wounds.

The next morning, as healing spells were cast, they heard a rushing of wind and a fierce and angry roar.  Fearing the Dragon's return, Grop turned Wang invisible and the Monk stepped out into the Great Hall.  The rest of the party thought it best to make a run for it across the hall to the opposite alcove and a hidden door.

As the party ran through the hall, the great winds were felt and heard when suddenly, the invisible dragon appeared and tried to bite the invisible Wang who successfully dodged the attack. 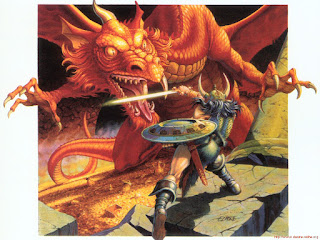 With the dragon present, the party went into action.  Su blasted a Cone of Frost at the dragon, wounding it as well as Wang Du who was in the line of fire. Thenus fired off her arrows and Sir Gwain, Arg and Wolf charged the ancient Red Dragon.  Koshan tossed the last Eye of Hithata which transformed into a Beholder!

Turning toward the party, Agatheron bellowed, "You have thwarted my plans in the valley and killed my army of Giants. Now I will kill all of you!" Taking a deep breath, the Red Dragon let loose a ball of flame!

Su and Grop disintegrate into ash!
Wolf was singed but is still alive.

Sir Gwain ducked behind the Shield of Lord Boomish and survives unscathed.

Koshan and the Beholder burst into flame and die.

Thenus survived but is near death.

Wang attacked the Dragon, drawing his attention back to the Monk.  The dragon tried to claw Wang but the Monk quickly dodged the attack.

Turning back towards the party, the Agatheron attacked the rushing party with his Breath of Fire, wounding Sir Gwain and killing Arg, Thenus and the valiant Wolfheir.

With only Sir Gwain and Wang Du left and near death, they fought with sword, shield and fist against the Dragon's claw and tooth.  With a mighty blow to the dragon's neck and the mystical flying kick, Agatheron, the Ancient Red Dragon died with not so much a roar but a whimper.

With the loss of all their companions, through many adventures, Sir Gwain and Wang Du stood victorious over their greatest foe!

With the Ancient Red Dragon, Agatheron vanquished, and all their companions dead, Sir Gwain and Wang Du wearily marched back to the Firbolg's village.

Met by the recovering McDagger and Lothar, Sir Gwain and Wang Du related their final battle with the Fire Giants and the Dragon.

After their full recovery, the remaining party members along with the Firbolgs explore the abandoned fortress in search of the fabled treasure hoard of Agatheron.  Eventually it is found and it is, indeed, beyond imagination.  This long chamber is filled from end to end with unimaginable wealth. Gold is piled knee-high and speckled with jewels, weapons and artifacts of ages past - truly a dragon's hoard.

With the help of the Firbolgs, the treasure is mined out.

Without much need for treasure, the Firbolgs accepted only a small portion, preferring to live simply and peacefully in the mountains.

Wang, Sir Gwain and McDagger headed south to the village of Litafjord only to find it a charred ruin including the Keep of Lord Boomish, who was laid to rest near the Firbolg's village.

Abandoning the village and heading south, they came across the the innkeeper of the Craggy Inn and his dwarven wife.  They had left the village when they saw the dragon coming down the mountain and survived his attack.

Wang donated a portion of his treasure to the innkeeper so that they would be able to start anew.

They all travel south to the village of Berkenstoke which was destroyed by in the Dragon's wraith.  The sturdy townsfolk had already begun to rebuild the village and once the news of Agatheron's death spread there was a big celebration in honor of all the heroes that died; Wolfheir the Viking, the priest of Mithra - Su, Grop the mighty wizard, Todashi the samurai, Thenus the ranger, and Arg.

Sir Gwain and Wang donated gold to the rebuilding of  Berkenstoke and headed west to Blackmoore, which was also in ruin.

As donations and rebuilding began there as well, Sir Gwain and Wang said their farewells for now and chose separate paths to travel with the hopes that some day their paths may cross again.

Posted by bliss_infinte at 9:00 AM No comments: