Dedicated to just the Swords & Wizardry material that I've put together.

Two fabulous gaming aid booklets based on the Swords & Wizardry Core Rules. The Book of Wizardry and the Book of the Divine.

Book of Wizardry
Give your players this hands on Spell Book for their Spell-casting characters. Compiled from the existing spell descriptions in the classic-style fantasy RPG Swords & Wizardry Core Rules by Matt Finch and organized by level of spell with an index. 40 page Digest.
*FYI, I am in the process of updating the Book of Wizardry to the New Core Rules, I'll also be adding Matt's Eldritch Weirdness spells as well.

Book of the Divine

But why stop with wizards? You don't want your players casting spells of divine intervention to be left out? This book of divine spells are for Cleric or Druid characters. Also compiled from the existing spell descriptions in the fantasy RPG Swords & Wizardry Core Rules and Supplemental Lore by Skathros.

With a few modifications both of these books can be used with most old style fantasy RPGs.

Both books are available as a free pdf download that you can print yourself or as a print on demand book at the Warlocks' Lulu Storefront.

NEW Swords & Wizardry Core Rules single sided character sheets.  There are two versions of the character sheet. The only changes being one having a space for spells (good for Clerics or Druids) and the other having more room for Equipment and Special Abilities. 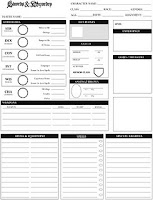 Classic Swords & Wizardry Character sheet. It's single sided and even has a space to sketch your character. I created a US 8.5 X 11 version as well as an European A4. Feel free to download it and use in your game.

I've put together The Warlock's Digest of Dungeon Dwelling Denizens, a no frills old school monster statistical reference in digest format. It lists the stats only for all the monsters published in the Swords & Wizardry Core rules with a couple others monsters that I've used in my campaign thrown in. It sports ascending and descending armor class so it should be helpful in most old school style games.