...Shadowy Definitions of the OSR...

Seeking the shadowy definitions of the OSR I have followed the dusty trail from Tenkar's Tavern to The Chronicles of Ganth.  And so....

Megadungeon: A funhouse. A nightmare. A dreamscape.  An ever changing endless twisting of tunnels, chambers, caverns and worlds within worlds ruled by all manner of creatures, denizens, cults, sorcerers, races, demons leading deeper beneath the surface or out into cosmic realms or into the depths of a soul or just out into a back alley.  In other words anything can happen and real world rules don't apply. When you walk in be prepared for anything.  ANYTHING!!

OSR:  A revival in the interest and workings of the origins of the loose play-style of out of print Role-Play gaming rules putting good times, friends, adventure, carousing, gratuitous violence, raunchy jokes and beer above rule-lawyering and character builds.

Crunch & Fluff:  The ratio between complicated rules and dice rolling involving charts and bell curves and story padding with the sweet-spot being whatever a group prefers.  (Me, I gave up crunch back in 1982 with Champions and Top Secret. Never looked back).

Multi-classing: Face it, every character is multi-classing; you're a thief and a grave-robber with some other skills such as wielding a blade or casting a spell.

Clones, Retros, Sims, etc etc etc:   Interchangeable terms for DIY rules and house-rules that are made public in creation of or support of the OSR (see above).

Module/Adventure: An interchangeable aspect of a campaign setting that can be inserted at any time and at any place during an ongoing adventure.  Can be customized as needed to compliment the mood or story presented in the campaign.

Hit Dice: Type and amount of dice that determine how much damage a character can take before he/she/it dies, usually from a horrible death, rendered meaningless if bit by a spider, centipede or other poisonous creature or after having consumed the wrong liquid.

Sandbox: An anything goes campaign setting where player actions determine the fate of kingdoms, destinies of characters, explorations of hidden lands but usually means getting drunk and setting fire to a tavern.  No planning required.

Here's the first 53 seconds of the intro scene from my animation project Beneath the Ruined Tower of Xenopus, based on the radio play my players and I did last year.

If anyone's dabbled in animation you'll know that 53 seconds is quite a bit of work!  But in this day of digital film-making it's not as long as traditional old school painted cell animation.  I'm pretty happy with the way it's turning out though I'll make a few adjustments; namely the final shot in this segment I'm going to make a bit longer.

I've got the rough mix of the sound track attached to it as well.

One minute down and twenty-nine to go!

Enjoy and feel free to comment.
Posted by bliss_infinte at 8:30 AM 16 comments:

Resting for the evening at the Hacky Shack, a friendly tavern in the town of Berkenstoke, Arvin's Avenger overhear the cynical one year anniversary celebration of the appearance and subsequent disappearance of Fumark The Foul as he and his band of soldiers were in search of the unguarded treasure of Medora the dragon.  They have not been heard from again since they had passed through Berkenstoke exactly one year ago.  Apparently, the 'unguarded' treasure wasn't so unguarded after all!  The last to see them alive was Abner the ferryman who ferried the band across the Blackmoor River and into the Howling Hills.

But the night wanes on and Sgt Lucius of Blackmoor stationed in Berkenstoke escorts Arvin's Avengers to Blackmoor early the next morning.

Meeting with Baron Blackmoor late that evening, they discuss the invasion of Kushanna's troops into the land of Eir'ian and that the Stygian wizard Zadir now rules Caladan.  Televon, priest of Morpheus, wants to return to Caladan and rescue it from the usurpers, mostly to just get his tower back.  Baron Blackmoor is more concerned with the growing strength of the Cult of the Black Sun in the Valley of Skulls and of a broken truce with the Hobgoblin King.

In exchange for the weaponry to help retake Caladan, Arvin's Avengers agree to spy on the Hobgoblin King to see if he is indeed planning on breaking he truce with Blackmoor and is building an army.

The next morning, the Avengers head out into the wild to spy on the Hobgoblin King.  They travel throughout the rainy day and arrive at the wooded hills in the evening, spending the night just inside the forest.

Early the next morning, the Avengers explore the forest trail heading deeper into the wooded hills.  As the rain continues to fall, Gnarly sends Tuk the owl out above the forest to scout ahead.  Eventually they come upon an intersection in the path with a giant horned chameleon  munching on some trees.  Gnarly takes the opportunity to chat with the beast and finds that there are Hobgoblins nearby but that is all he learns from the large peaceful reptile.

Again sending Tuk above the forest canopy, they spy a Hobgoblin camp.  While Gnarly cuts through the tangled forest to take a closer look at the camp, Arvin's Avengers and a pair of Hobgoblins stumble upon each other.  Arg quickly and aggressively skewers the first one causing the other to high-tail it out of there but he is cut short by a spell cast by Televon.

Here's one of the fully illustrated backgrounds featuring Zenopus' tower and the city of Caladan for the animated version of last fall's radio play.  This also gives you a general idea of the feel and mood that the background  images will have. 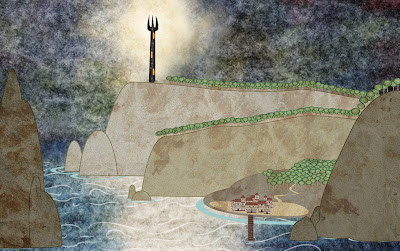 Again I tried to simplify and stylize the background just as I'm trying to do with the characters which is always a challenge for me but it's a great practice to loosen up my drawing style.

I've included the original sketches that started with a more realistic approach and ended up with the above image.

I'm still working on animating the final shot of the first scene but it's coming along.  I should have a clip to post soon.

Here are some of the sketches of my development of the sorceress Xenopus for my animated short based on the radio play my friends and I did last summer.

As with my earlier post I thought it would be interesting to show how I work thorough the character and the scene it self.

I knew for Xeopus I wanted to have a character that expressed a sinister quality and corrupted by her dark magic, but I also wanted a bit of allure to her as well. 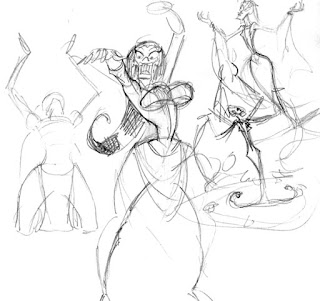 I go through initial sketches just to see what I come up with and where it takes me.  Usually I know what I'm going for but actually translating that to paper can be a challenge.  I also know that in the scene she appears she will be conjuring up a demon so I wanted to express that madness of dark power. 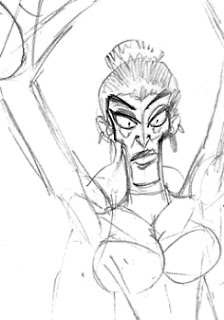 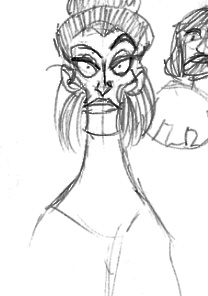 I was liking where I was going with the face but had a problem with the hair.  It looked too proper.  I wanted her to be more mystical so I worked in what I thought was Kirbyesque headgear 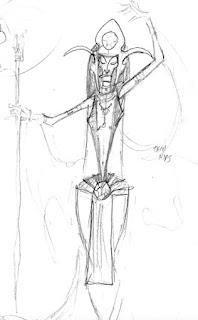 I also knew that in the scene she would be studying her spellbook so I began a few sketches bringing her into the scene.  You can see I actually begin working out some of the props and action details with notes written within the sketches themselves. 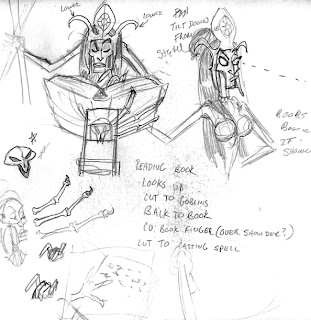 A bit more revision on the clothing and I ended up here. 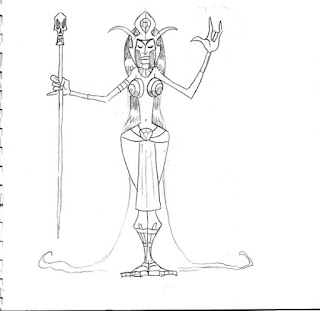 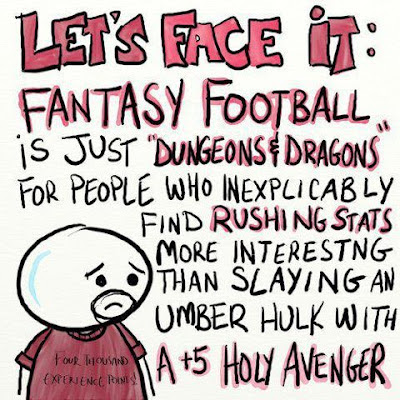 I've been working on the Tower of Xenopus animation project and making quite a bit of progress.  I'll be posting throughout the week and perhaps next ending with an actual thirty second clip from the narrated intro.

I wanted to document my progress so today I'm going to discuss the beginnings of my character design.

My goal was first to create a good cartoon character that would be easy to animate and position in various angles.  I began work with the characters of Slick Vinny the wizard and Geedleesmote the dwarf. 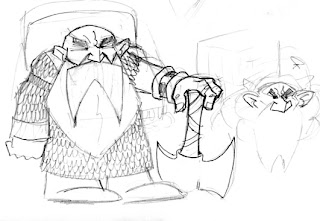 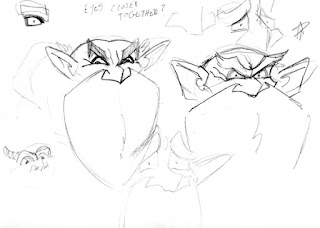 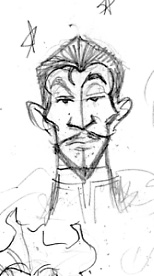 My initial sketches I felt were pretty good if I were to do something like a comic book but I wanted to simplify the characters even more.  I really wanted to just capture the 'essence' of the character with as few lines and possible - a real challenge for me but I think I was finally getting somewhere. 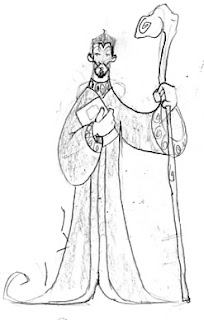 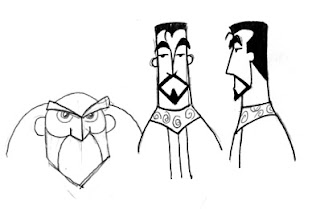 Here I got to just the simplified characters of Geedle and Vinny.
Below is a test "cell". 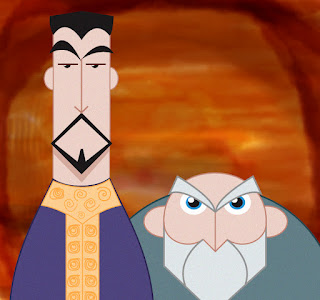 I'll be adding a bit more details to the dwarf's armor.  After working with the animation software a bit I think I'll add a bit more detail to the characters but as of now, this is where I'm at with them.

Next: Xenopus Character Design
Posted by bliss_infinte at 10:20 AM 5 comments: