Leaving the hall of the young Dragons behind, the party back-tracked they way to more familiar hallways.  Coming upon a chamber with three sarcophagi, which they have usually avoided, decided to open and were immediately attacked by the three mummies within.  Using fire they defeated the ancient foes but not before the mountain lion Puma fell. 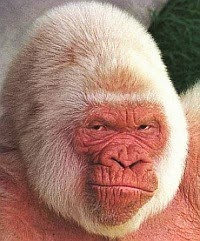 Continuing down some unexplored hallways they came to a chamber where dwelt intelligent mutant ape Klorbag.  Klorbag gave them refuge from the dungeons and the party learned that the mutant white ape was part of the clan that they had slain earlier.  Klorbag had sought vengeance on his clan for shunning him and banishing him into the depths of the dungeon.  It was there that he stumbled upon a chamber which changed him and gave him the big brain that he now possessed.

The party also learned from Klorbag that they were currently exploring the fourth level of the dungeon and that there were as many as ten levels filled with all manner of horrific beasts and deadly traps.  Also that there was an even more fierce dragon down deeper.  They also learned that a clan of hobgoblins infested the level above them and that they may find Fumark there as well.

After resting in Klorbag's lair, and learning of the nearest stairway up, the party ascended to the third level and quickly came across some hobgoblins which they quickly dispatched.  Exploring down a long hallway they spied a larger lair.  Avoiding that for now, they explored some more hallways and came across another group of hobgoblins guards which they fought and were victorious.
Posted by bliss_infinte at 9:28 AM No comments: