One game I don't talk about much but really enjoy is Wings Of War, a card based World War I dogfight game distributed by Fantasy Flight Games. You have a plane printed on a playing card. Each turn you pick three maneuver cards as does your opponent(s), then reveal, move and then fire.  A fast paced war game with no dice involved at all.

But what really kicks the game up a notch is using the Wings of War plane minis.  The dogfights become quite amazing as the planes buzz around each other on the playing surface.

After spending some money collecting the planes, many of which are not in production any more (the game has since been picked up as Wings of Glory and new models are on their way), I felt that the battle mat was the next item.  However, looking to purchase or print one on my own would cost quite a bit more than I was intending to spend.

So what do we do here at the Warlock's Home Brew?  We makes our own!

I loved his final product of the hand painted battle mat.  It looked easy enough so for only a few dollars ($9) and just a couple hours of my time I'd have myself a pretty classy Wings of War battle mat. 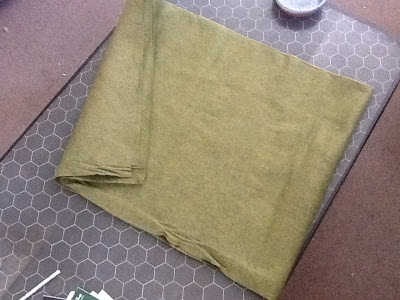 Instead of the thicker plastic based faux-grass material Wombat went with, I purchased some nicely colored wool for only $9.  This was very nice material and had some tooth to it which I felt would help with applying the acrylic paint.  I wanted a 40 inch by 50 inch piece of fabric but the widest this particular material came was 36 inches.  I ended up with 36" X 50" which ended up working just fine. 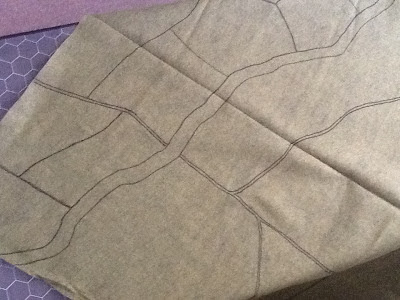 Based on the tutorial linked above I quickly drew in black the field patterns, roads and rivers. 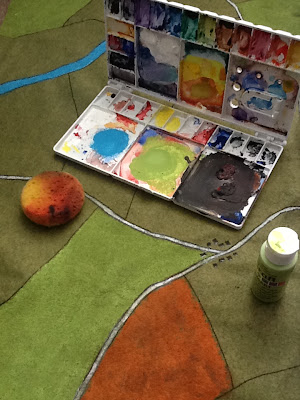 Following Wombat's directions, I used a sponge and painted in some of the fields trying to stay as close to the outlines as possible. I used a brush for the roads. 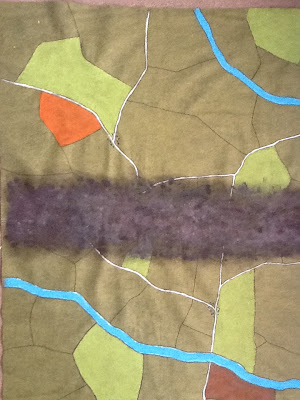 I added No-Man's Land across the center of the fabric using layers of black, browns and reds.  At this stage I still have to add the craters and trenches but... 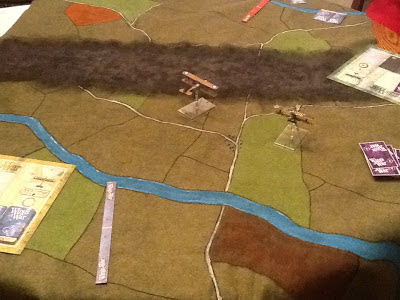 ...as you can see it was quite usable as it.

So this holiday weekend we played a couple of games on the mat. It worked out great, and the game was fun (thought I got shot down all three games).  My wife, who had played the card version of the game and wasn't all that impressed enjoyed playing with the minis and actually requested to play the game again the next day - which we did and she proceeded to shoot me out of the sky again!

Looking forward to getting the group into playing some Wings of War in the near future.
Posted by bliss_infinte at 9:10 AM 2 comments:

Still lost in the twisting caves beneath the hobgoblin king's domain, the party's Bugbear prisoner demands to be untied  and given a sword so that he may fight along with his captors for his life.  You see, no one has ever returned from these pits says the Bugbear Thak so "let me die like a Bugbear, with sword in hand, or just slay me now!"

Gnarly takes pity on the creature and votes to free him and reluctantly the others agree and hand Thak a rusty sword to fight with.

They continue exploring the winding tunnels eventually coming across a small cavern with shabby stone throne upon which was a mangy kind sat.  "Bow and pay tribute to the Lord of the Underworld" he shouts to the party. Surprisingly, Arg bows towards the "king" as his four rag-clad followers are already doing.  The rest of the party bows and King Arthur invites the visitors to come feast with him and the Fonzarellis as they are willing to share their single rat roasting on a stick.

The "king" is quite mad and Thokmorton, however, refuses to bow which enrages the king.  He sends his Fonzarellis to attack the cleric.

A battle ensues in which Thak falls as well as the Mad-King and his followers.

A quick search of the cave reveal a small chest and a secret passage.  Following the passage the party finds another eight sided room with doors on each wall very similar to the room they landed in from the pit-trap above.

Marking these doors they decide to back track and explore some of the side passages they missed.  In doing so they come across an Owlbear which they hack to pieces and a couple of giant shrews.  They collect the meat from these dead animals and lock themselves into their original eight sided room, resting and smoking their kills.

Continuing their exploration they are ambushed by a Gelantious Cube which is slowly burnt as it peruses the party.

Continuing down the cave that the Cube had blocked, they once again, find themselves in the second eight-sided room. Exploring the passage beyond one of the doors they come across a cavern with a steaming chasm in front of which was a giant lizard.  But before they can react to that creature, from the steam vent comes a swarm of Steam Weevils..... 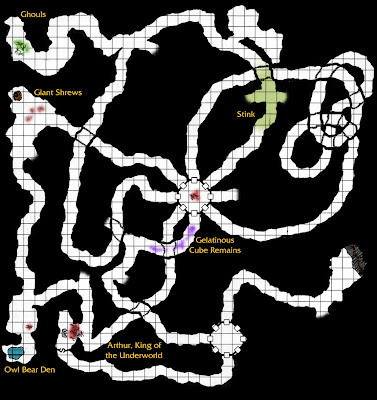 Posted by bliss_infinte at 3:16 PM No comments:

Session XLVII: Between A Throne And A Hot Space

After having defeated the Hobgoblin king and sending his guards on the run, our so-called heroes locked themselves in the throne-room for a little rest and looting.  However their resting is sporadically  interrupted by taunts coming from the gathering of Bugbears and Hobgoblins on the other side of the barred door.  Realizing that there is no other way out except the way they came they prepared themselves for their final battle with the Hobgoblins.

During a lengthy lull in the taunting, they peeked out the door and discovered that the hallway had been littered with wooden furniture.  Suspecting a trap of some kind, Gnarly sent Tuk the owl down the hall to investigate.  Through the eyes of his trusty owl he spied the Bugbears and Hobgoblins gathered together and hidden down a side passage.

Examining the floor they also discovered that it has been covered with oil.  The humanoids have set a deadly trap!

To beat them at their own game, Televon ignited the oil spoiling the Bugbear's trap.  Throkmorton wanted to rush out there an confront the enemy in combat.  Seeing as there is no other way out they slowly moved forward down the corridor with Throkmorton singing insults at the Bugbears and Hobgoblins. 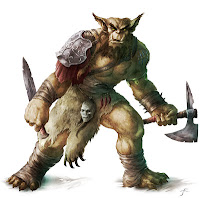 Finally face to face, the Bugbears offered the party their freedom if they let the Bugbears into the throne-room to declare themselves the new kings.  Throkmorton challenged the leader to an arm-wrestling match - winner takes all.  The Bugbear leader took him up on that and as they sat down to the match, Throkmorton clobbered him with a mace.  The Bugbear just grinned and all hell broke loose!
A melee began in the tight confines of the hallway but with a hold person spell cast upon the bugbears and flaming oil being tossed, the battle was short lived.  As Arg the half-orc cut his way through the hobgoblins and began to pursue the fleeing enemy the rest of the party captured the remaining Bugbear and tied him up.

Giving up his persuit, Arg returned to the party and after a brief interrogation of the Bugbear they found that they have slain most of the opposition.  What better plan then to loot the place!

Confidently walking down the corridors suddenly a forty foot long portion of the floor opens up dropping most of the party into darkness below with Gnarly being the only one left up top!

Tumbling down hundreds of feet through the rocky vertical shafts, they found themselves battered and wounded in an eight sided room with a door on every wall.

Suddenly, two crazed and dishevelled men burst into the room and attacked the party but Arg and Throkmorton made quick sport of those devils.

Without a way to get his companions our of the lower depths, Gnarly climbed and slid down the opening to meet up with his comrades.

Having numbered the doors with chalk, the party explored through one of the natural passages beyond.  Passing through a very stinky area they avoided any side passage and continued forward.

After exploring a cavern and coming across a number of side passages they were attacked by some ghouls!  Not to worry, there were two clerics in the party!  But, alas, the ghouls were resistant to both of their holy symbols and attacked! (Both clerics need only a 4 to turn them but both rolled under!)

After slaying the ghouls and sifting through the trash to find a smattering of treasure play ended for the night.

Looking forward to the next session.  It's always fun (for the GM) when the party is lost/trapped underground!
Posted by bliss_infinte at 10:00 AM 1 comment:

Day Of The Dead: A Brief History Of Death In Our Campaign 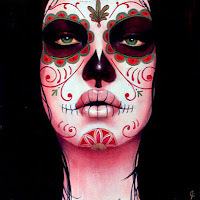 Arvin Ardmore -  Acolyte of Mithra
First appeared in session 1
Died bravely in session 5 during a melee with Sgt. Morak of the watch and traitor of Caladan.  First campaign death was quite shocking.  Arvin wouldn't be avenged until session 42.

Gedleessmote Hammersend - Dwarven Axe-bearer
First appeared in session 1
Died not so smartly when he forgot to heal his lost hit points from one session to the next.  This legendary character fell in session 20 covered in lava from a living statue.

Adara - Stygian Strider
First appeared in session 10
Succumbed to the icy touch of a wight in session 27. Laid to rest in the graveyard above Caladan.

Tibag Backstabber - Half-elf Robber
First appeared in session 1
After hacking to pieces a helpless Owlbear, Tibag slipped on the ice ledge above some blue lava and died upon falling in.  Session 33 was a very sad day.

But adventuring if for the living and for that we have the longest surviving character Wolfheir the viking who has lived through all 46 sessions.  Next we have Skwanky Furrytoe and despite his many near death experiences has managed to survive from session 3 to the present.

The best thing about an ongoing campaign is the collective history that is created by game-play.  Character death adds to that history and makes it memorable.
Posted by bliss_infinte at 10:00 AM No comments: