A Campaign Begins for Newbies

Like many of you, the affects of the Coronavirus pandemic has disrupted how hundreds of millions of us fellow mutants interact and function in our jobs, communities and the world. It's a scary time for many people and, in my experience, a majority of the general population has been dealing with this in a pretty positive manner. Everyone has had to make adjustments in everything they do and all of us are experiencing a collective experience on many levels.

As you've probably noticed, The Warlock's Home Brew has been shuttered for quite some time (since late 2017). This had happened for a number of reasons. Work had gotten very busy and I didn't really have time to dedicate to blogging or gaming.  Plus, after eight years of running a continuous face-to-face campaign with my friends (all documented here), I was pretty burnt out GMing.  Finally, most of the players slowly started to disperse and go their separate ways so it felt like it was a good time to wrap up for a while.

But, lo!  Fast forward to our current timeline!

With communications with friends and family moving online, I thought now might be a good time to give online rpg'ing another try.

I had worked with Roll20 years ago and found it to be a fantastic system though, for me, time consuming and a bit clunky for a more fast-paced game such as Swords & Wizardry.  It was a fun experiment and would dabble on the platform every once-in-a-while but always just stuck with face-to-face play.

As my wife and I and a couple of our good friends that we travel with began meeting online for chats, I put it out there for us to use that time to dive into some fantasy adventuring!

Recall, if you will, that my wife is not at all a RPG gamer.  I did get her to play in our S&W campaign for a short while but it just didn't click with her. The role-playing just wasn't her thing.  Plus, we were playing with all of my friends, seasoned role-players so she felt a little out of her element.  I guess killing her character off with a Gelatinous Cube wasn't helpful either - though she fondly jokes about that experience!  See, PC deaths are a good thing!

Our friend David hasn't played the game since he was in grade school some 45+ years ago (that is crazy when you think about it), but he recalled enjoying the game enough to give it another try.

And finally, our friend Paul who has never, ever played and only knows of the game from watching Stranger Things said, "Sure, why the hell not."

So it had begun!

In short, we've had 3 sessions so far with two lasting more than four hours! We've been playing twice a week and our 4th session will be this evening.  It has been very successful and everyone has been having a great time. I've been working to streamline our Roll20 play so things run smoothly and I'll share some of what I learned about that here as well as covering our campaign summaries like I did before.

Oh, and yes, Swords & Wizardry is my game to play!

So stay safe, everyone, and... 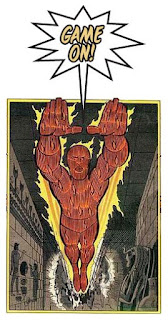 Posted by bliss_infinte at 9:44 AM No comments:

A Dim Light Flickers in the Tower....

Watchful eyes of travelers and journeymen have noticed a dim light glowing at the top of the old tower. Does this portend good or bad omens? Has the old Warlock returned or is it some dark gloom from the dim distant past? Only the curious may approach. Only adventurous souls may seek the secrets of the Warlock's tower. As those brave souls cautiously advance, the entrance door creeks open...
Posted by bliss_infinte at 9:45 AM No comments: