Session L: The Dungeon and the Dragon

After our long holiday gaming break we got back into our Swords & Wizardy campaign and continued where we left off, towards the end of the classic Horror on the Hill adventure module.

With the party holed up on a small shelf above an underground river, they had rested so that Arg the incredibly mighty Half-orc can recover from his panic attack about being wet and lost deep underground.

After their breakfast of smoked Owlbear they began planning on how to get to the next shelf where there was a cave opening and a Lizardman guard.  It was decided that Arg would float downstream like a dead body and when the Lizardman investigated the Half-orc would attack.  To help the fully armored warrior float the party backtracked and gathered some of the dead followers of the mad King Arthur.  With these tied together, Arg was able to float downstream while the rest of the party followed commando style.

As the floating pile of bodies passed the shelf, the Lizardman called over his other two companions and stuck a spear into one of the bodies (luckily not Arg).  Stepping into the water, the lizardman pulled the bodies over and that's when Arg attacked.  The rest of the party, revealing their presence attacked as well.

Arg, back to his old self, skewered two of the lizardmen as the last one tired to escape.  The half-orc perused him, and after getting his spear stuck proceeded to pummel his fleeing foe.  Suddenly, out of a side cave, four more lizardmen rushed out and attacked the party.  With some hack and slash, the party was victorious.

Hiding the bodies it was decided best to avoid the passage where the fleeing lizardman was headed and instead explore for a way out going the other direction.

Exploring some cave tunnels they found two that were blocked with fifty foot high cliffs guarded by a concealed lizardman.  Avoiding these, another passage found that the cliff-face had crumbled and the party was able to scramble up.

A few more tunnels and they found two sleeping lava-lizards.  Instead of avoiding these sleeping creatures Arg and Throkmorton, follower of the chaotic god Kaulk-Ru, began to butcher the hapless lizards who fiercely fought back.

Once the lizards were slain, the party found a stone slab door.  With some effort they opened it.  Inside, was an armored skeleton sitting in a chair with a sword and other items.  Once they were sure it was indeed dead, they removed the sword and armor with both appeared to be magical.  Televon cast speak with dead and found out that the skeleton was one Sir Henry who also was lost in these tunnels and eventually died here.  He also told them that the sword was a powerful weapon against dragons.  Sir Henry asked them to bring his remains back to surface and bury him near his beloved in the cemetery outside of Caladan.

In this 'safe' tomb, the party decided to lock themselves in and camp to heal their long standing wounds. 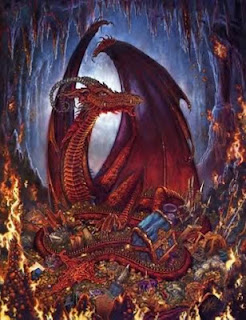 Four days were spent in this sealed chamber and eventually Gnarly and Televon discovered a secret door.  Through the door and following a narrow passage, which ended, they found another secret door.  Opening this door and entering a very large cavern they found a pile of treasure beyond their wildest dreams on top of which was lying a Red Dragon, who appeared to be quit conversational.  The party was overwhelmed with awe and hopelessness as they looked into the eyes of their doom!

Gnarly, speaking the dragon's native tongue, introduced themselves.  The dragon introduced himself as Gorrokk the Fierce and asked the party to admire his hoard of gold.  Televon started telling the dragon about all the gold that could be found in Caladan and eventually began to insult Gorrokk's own hoard.  That's enough to anger any Red Dragon and Gorrokk the fierce attacked the doomed party with his full force against the cleric of Morpheus.  But earlier, Televon had found a magic ring that proved to be of fire resistance which protected him from the flames.

Gnarly the druid and Arg had nothing left to do but attack the dragon and defend their companion.  The dragon, however, fought back with tooth and claw and picked up the druid in his jaws, snapping bones and tossing the mangled body across the cavern.  Gnarly, initiate of the 4th circle, was dead!

Defending himself against the dragon's attacks, Arg raised Helkris the Dragon Slayer and plunged it into the breast of the beast.  The beast raised up and roared mightily but alas, fell down dead!

With the dragon dead, the gold theirs and the cave exit exposed, the weary party made their way back tot he surface....

With the death of Gnarly Blunderbrush and the slaying of Gorrokk the Fierce, a deadly red dragon, the wounded and weary party finally clawed their way back to the surface and sweet air of freedom.

Exiting the dragon's cave back into the thick forest within the Howling Hills, it took the rest of the day  to get some sense of where you were.  Figuring you were somewhere east of the ancient ruins and the entrance of the Hobgoblin king's domain, Televon and Wolf carried Gnarly's mutilated body back towards the town of Blackmoor and to the temple of Morpheus.  There the high priest of the dreamweaver raised the druid back from the dead (for a promise of 6,000 gold coins for the temple coffers and an additional 10 tithe from Televon).

Meanwhile Arg, Skwanky and Throkmorton went searching for their horses and cart left back at the ruins.  There they found their cart but their horses had been killed and eaten by three ogres.  These ogres were beat into submission (mostly by Arg, though Skwanky continues to take the credit for it) and were uses as beasts of burden to haul the dragon's hoard out of the cave.

After a number of laborious days hauling a wooden cart weighted down with coin through a gnarly forest and back onto a trail, the party with their enslaved ogres, worked their way back to Blackmoor.

After days of rest, the party informs Lord Blackmoor of the events in dealing with the Hobgoblin king.  With the Hobgoblins no longer being a threat to the lands of Blackmoor, the lord decides that he can aid you in retaking Caladan from the Stygian forces of Kushana.


So, with this session, we've brought our campaign to a satisfying plateau, a nice conclusion to fifty sessions which we've played since October of 2009.  And ending a dungeon adventure with the rare dragon was just too perfect!  These last handful of sessions were based upon the classic adventure module "Horror on the Hill" which I'll be talking about more in the next day or two.

We'll be continuing these adventures in the future but, for now, our gaming group will be branching off into some other RPGs and board games.  All of which I will keep you posted about here at the Home Brew.