Session XLIX: The River Of Despair 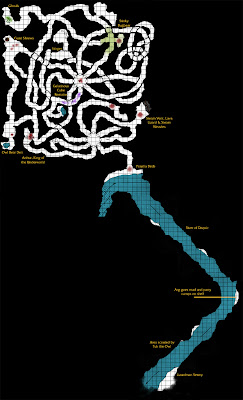 Still lost and trapped in the caves beneath the palace of the hobgoblin king, our party of fearless mercenaries were face to face with a swarm of Steam Weavels and a Lava Lizard!  The insects swarmed the half-orc Arg but Gnarly the druid called forth a ball of flame which attracted the swarm to the heat and he tossed them down into the steam vent.  With Arg free he lead the charge against the Lava Lizard and soon hacked him to pieces with the only loss being a melted sword.

As they decided what path to take to find a way out of these caves, they cut the lava lizard up to make armor out of him if and when they ever escaped.

Exploring more tunnels they ran across another lava lizard then some Piranha Birds and eventually found a large cavern with a running river through it an out into a larger cave opening.

Thinking it best to backtrack and cover all their ground in hopes that they have maybe missed an escape route, they found a secret room guarded by some hungry striges guarding three chests of valuable treasure!

Not finding anyway out of their situation short of trying to build a scaffolding to gain entrance to the pit that sent them down here they headed back to the underground river.

To their right was the roar of underground rapids while to the left the river meandered deeper into the underworld.

Thinking that the traversing the rapids would lead them up towards the surface they began walking against the current but the further they traveled the stronger and more treacherous it became until one by one, they were being knocked down and sent tumbling back to the main cavern.

Hopeless and wet, they decided to travel downstream in the warm shallow river occasionally finding a dry shelf to rest upon.

Alas, being wet, wounded and lost was too much for the mighty Arg and he succumbed to fatigue and broke down and wouldn't leave the shelf.

At a loss of how to keep moving forward with an unwilling half-orc, Gnarly sent Tuk the owl on ahead.  Further down the river, the owl spied another shelf, larger with a cave opening and with an armored lizard-man standing guard!

It was here that the party decided to rest; on a tiny shelf, inches above an underground river hundreds of feet below the surface, wounded and wet...

This was our last RPG session of the year as the holidays become too hectic to gather together.  I was hoping to finish with more of a bang, and those of you who know the adventure know what I'm talking about, but, as usual, the players didn't go along with my unspoken plan.  So we ended on a bit of a grim note.  Not a bad thing by any means, actually.  It kind of felt like the ending of the middle of a trilogy.

So, a break for now and when we return there will be plenty of action and perils ahead!
Posted by bliss_infinte at 11:30 AM 2 comments:

One aspect of a classic FRPG that is often overlooked or disregarded after the initial character generation is Encumbrance.

Encumbrance is the foundation of all movement and time based aspects of the game session.  It lets the GM and player know how much the character is carrying which in turn determines that character's movement rate which in turn determines distance traveled during a round or turn or day which determines when an encounter may happen or a resource or spell effect is used up.  Remember, a party only moves as fast as it's slowest character, which can cause all sorts of trouble during a dungeon delve or wilderness journey

As you can see, there is a lot tied into encumbrance but it is often something that is glossed over and estimated throughout a session by both players and GM.  There's nothing wrong with that.  Players and GMs have plenty to keep track of during a session; treasures, hit points, equipment resources, NPCs, quest clues, etc., and making encumbrance just one more thing to keep track of ends up being at at the bottom of the priority list, kind of like a dump stat. But I believe that every stat or ability is important and can and should be used in a game as well as encumbrance.

Encumbrance is a dynamic resource and fluctuates often; weapons picked up, dropped or armor exchanged and treasure gathered.  It changes more than most other 'managed resources' such as provisions or money spent or spells used.  Usually there is no place to recalculate a character's encumbrance and therefore movement rate on a character sheet which has always caused a problem with this very important rule.

I came up with an encumbrance tracking sheet for my Swords & Wizardry campaign and used it this past session.  It seemed to work out well and got all the players to constantly manage who was carrying what and how much coins one was carrying and what to drop in case of retreat and who wanted to stay spry and who didn't mind being bogged down.  It brought a whole different aspect of resource management that was missing from the game.  It didn't slow the game down a bit and added much more party cooperation at the table as they always thought about how weight would be divided up and ditching those 1,000 copper pieces.

I liked it and the players didn't seem to mind.

I used the Swords & Wizardry weight and STR/movement breakdowns which you should be able to use in almost any classic style game or feel free to use this format and come up with your own with what ever game you are playing.

Posted by bliss_infinte at 10:30 AM No comments:

Like any great game, Wings of War has quite an enthusiastic online community built up.  Over at the Wings of War/Glory Aerodrome you can find all manner of house-rules, missions, campaigns, tutorials, rule questions answered and camaraderie!

Though the game Wings of War is geared for two or more players the Aerodrome has a great set of solo rules.  I gave them a run this weekend and found them to be quick and easy to use and kept the game pretty thrilling!

I was flying a solo patrol at 6,000 meters over the French countryside which had now become a dreary landscape of desolation, when J.R. Martin, my observer, spotted a Hun over his territory in what appeared to be one of those new Albatross bi-planes. 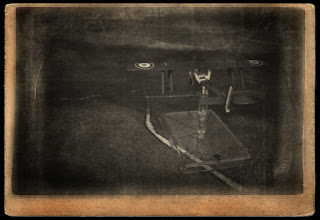 The both of us moved in for the engagement, guns blazing! I know I scored some hits as I saw his canvas flapping in the wind. 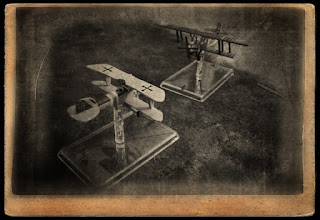 Martin let loose as we passed and I immediately spun around to catch this devil again! 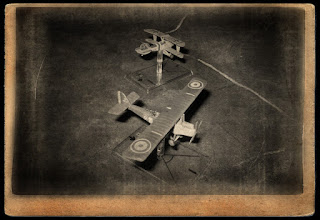 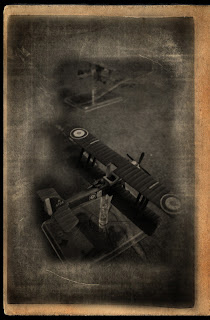 With the colorful plane in my sites I pulled the trigger on my Lewis MG. 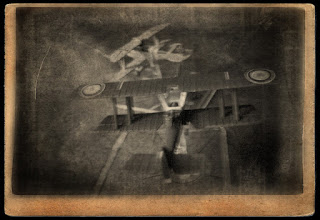 But this Hun was crafty and he flew his maneuverable plane like the devil himself, twirling and spinning... 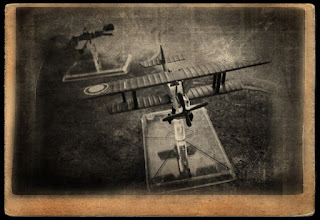 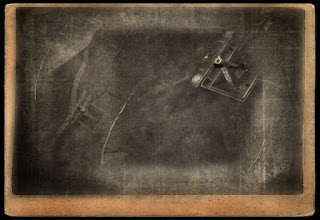 and we danced in the air like two crossed lovers, firing our guns trying to steal that kiss. 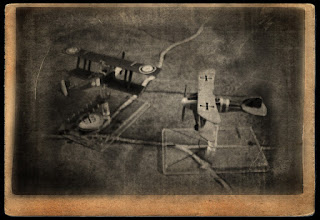 Suddenly I faltered and this German got in tight behind me and riddled me good! My engine smoked, my wings shredded. Martin tried his best to finish our enemy off as he was stuck right in my observers sites but curse our luck, Martin's gun jammed! 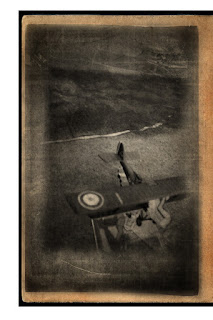 I thought it best to head low into the safety of the French territory to gain some cover from friendly troops. The German airman must have thought himself lucky as well and choose not to press his luck and did not peruse us.  Martin and I were happy to escape with our lives and looked forward to some brandy back at the canteen to calm our rattled nerves. 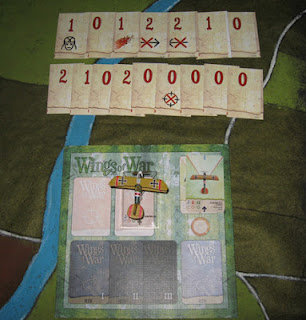 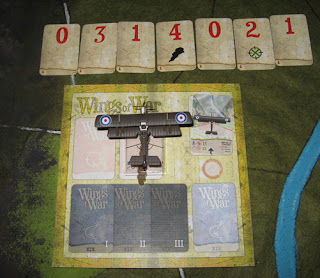 This was the first solo game I ran using Richard Bradley's rules with the altered maneuver card sheets (with the die roll of a 1 or 6 giving a separate result). Running the single plane AI went surprisingly quickly and the game moved along well. It was a bit nerve wracking as I thought I would be able to press my early advantage but the AI was relentless in it's maneuvering and attacks. I did get the Albatross in my sites a number of times but kept drawing zeros from the B deck and couldn't finish him off. He did get fewer hits on my but they were more damaging. We both ended up with only 1 or 2 HP left when I decided to retreat. I'll probably add the pilot attitude table to my solo games as well. It may flesh out the AI pilot a bit more and give him the option to retreat if wounded too much which would aid me a bit as he wouldn't just be a killing machine!
Posted by bliss_infinte at 2:04 PM No comments: