Session LXXVI: And In Conclusion...

Needing to recover from the brutal battle with the Ant-men, our party of fearless adventurers barricaded themselves back in the hobgoblin lair.

Once rested, they continued their exploration of the unexplored third level of the ruins.

They opened a door and find a room guarded by three Manticore!  As they decided what the do, the Manticore attacked Thenus with their spiked tail.  Some of the party wanted to make a hasty retreat but Minimus roused their fighting spirit and they charged into the room and attacked!

After a quick battle and some minor wounds the Manticore were defeated.

Exploring the room only turned up garbage and the disgusting habits of the defeated beasts.  Opening one door was found to hold a chamber just filled with Manticore shit;  walls, floor ceiling.  The stench was unbearable and the party thought best to leave the area, but Wang Du thought otherwise and braved the shit filled chamber poking around with his spear.  The disgusting search paid off and a chest hidden in the feces was discovered! With the help of Skwanky, the chest was pulled out.  The chest was filled with riches and the fabled Boomish shield which they were sent in to recover!  Unfortunately, a cursed scroll was also found the upon reading it, Centari was turned into a pillar of salt!

With the long lost and sought after shield in their possession and with a cursed comrade it was decided to leave the dungeon and head back to town.  Protecting their salted friend from the elements and hungry horses, the next morning Minimus was able to remove the curse and bring Centari back to the group, though with patches of raw skin from everyone rubbing their dried meats on the salty treat.

Triumphantly returning to the town of Berkinstok the group shared their wealth and tales.  They returned the missing shield and family heirloom to Veshir Boomish who said that their family was forever in the debt of the party and that from this day forward, all of the Boomish clan will be considered allies.

With treasures identified and allies made, the party celebrated their victories and triumphs and settled in for a long earned rest!

And it is here that we put the campaign on hold.  We're taking a break from our Swords and Wizardry campaign for now to dive into some other gaming activities.  One of our players, Mike, who ran a Robotech campaign a while back, will be running White Star customized for the Star Wars universe.  We've already rolled up characters and let me tell you that no world or universe is too scared for us to debase!  I'll try to post about White Star once that game kicks off.  Right now it looks to be board games for a short while.  We'll return to S&W sometime later so Game On!
Posted by bliss_infinte at 9:00 AM 1 comment:

Before he was Saruman (the ultimate in perfect casting!) and Count Dooku he was Dracula and Scaramanga and Lord Summerisle.  Like the films of Ray Harryhausen, I grew up watching all his movies. Hammer Films would not have been Hammer Films without him. Tons of great iconic roles and that voice! Cinema has lost a great presence. 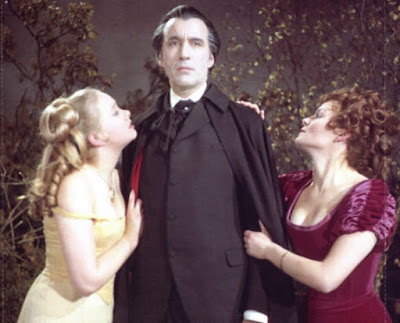 Posted by bliss_infinte at 10:35 AM No comments: