Back in the early 70's there was a small explosion of some true to genre science fiction films that Hollywood was cranking out, no doubt due to the success of 2001: A Space Odyssey, and The Planet of the Apes (which spawned four sequels).  Films like Death Race 2000, The Omega Man, Silent Running, Soilent Green, Logan's Run, Rollerball and many others.  These were true Science Fiction stories, and like all good true science fiction, posed questions about man's relationship to himself, the universe and machines.  All of this was shattered in 1977 when Star Wars, a science fantasy film, rolled over the genre like a Jawa Sandcrawler.

One of those early 70's sci-films was called Westworld a film about a resort that, for one thousand dollars a day, you can live out your fantasies in one of three fully-immersive environments, Medievalworld, Romanworld and Westworld.  The movie was written and directed by Michael Crichton (Jurassic Park, Andromeda Strain) and introduced his 'theme-park horror story'.  The twist is that all the other participants in these 'worlds' with the exception of the guests, are robots.  Of course "Nothing can go wrong".

So what does this have to do with Role-playing?

Westworld has all the elements and is a perfect analogy of a role-playing game.  Spoilers ahead, so if you need to go watch the movie do so now.

The move starts with two guests, played by James Brolin and Richard Benjamin, head to Westworld to live out their fantasy of living a real wild west experience.  Brolin had been to Westworld once before (the experienced role-player), for Benjamin, however, this was his first experience (a role-player newbie).  Once they don their western garb provided by the resort Brolin kinda helps Benjamin through the ropes of getting into this role of a fantasy experience.  Benjamin has a hard time of 'letting go' and getting into the fantasy.

Their first stop, like any good role players, is the saloon.  Here they run into the antagonist of Westworld, the Gunslinger played by Yul Brenner who challenges Benjamin.  Here it's great to watch Benjamin's character, a Yuppie from Chicago, attempting to get into this fantasy role of cowboy and finally guns down Brenner.

Once the two friends loosen up to this 'new' fantasy world they do what any good role-players do; they start drinking, whorin' and shooting up the town.

It's really great how the first two-thirds of the movie parallels the general path of most players actions in role-playing games.  With a free open 'world' the first things that happens is that players, get drunk, whore around and cause trouble in the towns they visit.  A great point to note here is that after Brolin and Benjamin kill the sheriff in a jail-break, the role of sheriff of taken over by none other than Dick VanPatten, another guest with thick  glasses (totally out of place in the western scene) bumbling about.  A great visual of players entering these archetypical roles and projecting personae onto their characters.  In Medievalworld, the guest there hits on the queen and voluptuous wench while eating and drinking to his delight of a no-consequence world.

Keep in mind here, the guests are having sex with robots.

The robots in the town are all the NPCs that the players (the stars of the story) run into. They are there only for the guests (players) interaction with their stereotypical roles and dialogue and simple purpose - to add life and color to the guest's (player's) experience of the world.

The robots are controlled by a master control center that represents the Game Master.  Here they re-program the robots on the fly to adapt to the guest's (player's) actions; altering their preconceived 'storylines' to please the guests (players), but also tossing in pre-programed events such as the bar-fight.  All fantasy RPG tropes are visited here.  Note that GMing on the fly is displayed by the technicians of master control, allowing the guests (players) to do what they desire but reacting to it and keeping it contained within the 'safe' notions of the control center (GM).

The guests (players) revel in their fantasies as there are no true consequences to their actions.  Killing NPCs, sleeping around, breaking the laws, the guest loose themselves in these actions but their feet are still rooted in their real world.  It's quite well captured this dual existence of the player and the PC.

But here comes the third act.  Here the guests (players) and the control center techs (the GM) are surprised at what happens next.  And what happens next is the unexpected.  Here the random dice rolls take over and surprise both groups of participants creating this fantasy experience.  Within the movie, the robots start acting on their own and begin killing the guests.  In game terms, the random dice start rolling events and actions that neither player or GM were expecting.  Here the movie rolls into unexpected territory - unplanned and deadly.  The guests (players) begin reacting uncertainly for their lives, the techs (GM) does their best to roll with what's happening trying their best to regain control of their 'game'.

At this point enough reality seeps into the fantasy world to make it interesting, thrilling and deadly.  It is here that the lone survivor, Benjamin being relentlessly perused by the Gunslinger, runs 'off map' and into the other 'worlds'.  It is here that he gets his $1000 a day role-playing value!

I saw this movie when I was a kid and Brenner's emotionless robotic Gunslinger scared the crap outta me.  Watching this movie now, sure things seem dated but in a retro fun way, but watching this with the eye of a role-player was a revelation.  The movie is a perfect parallel to the RPG experience and worth spending an hour and a half watching.  If any movie needs a modern reboot, this is the one.

UPDATED:  Case closed thanks to The Archmage and his Collection of Creepy Horrors!

Last month there was an A-Z blog festy thing.  Some great OSR blogger posted some really great monsters I believe he came up with.  Well, for the life of me, I can't find those  posts and I have no idea who posted them.  I was pretty sure I was a follower of his blog but for the life of me I can't track it down - because his monsters were really freaky and I want to use some to, you know, freak my players out.

Does anybody recall those posts...?
Posted by bliss_infinte at 8:49 AM 3 comments: 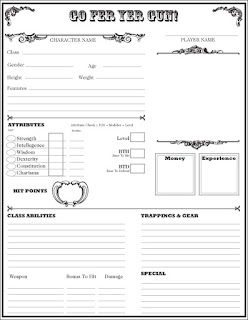