Session XCII: The Half-orc and the Fire Giant

NPC's
McDagger (thief)
Biggs (fighter)
Koshan (Ogre Magi)
Lothar (Firblog)
Lord Boomish
Having miraculously defeated a large onslaught of Fire Giants, the beleaguered party began to explore the grand hall. Arg, Lothar of the hill people and Grop examine the massive obsidian alter and the magic circle holding a burning Fire Elemental.  Grop dispelled the Elemental back to it's plane and Lothar read the inscription on the alter.  But the respite is short lived as a massive Fire Giant in flaming armor and carrying a flaming sword burst out from behind another of the curtained alcoves.  The party and the Giant charge each other and a bloody battle takes place.  The Giant chief falls!

Grop detects that the armor, sword and the giant's two rings are magical along with the Fire Giant's obsidian alter.  But as they decide what to do with all this, the Giant's wounds begin to heal and he begins to rise once again.  Sir Gwain draws his Frost Blade and beheads the giant.  Arg takes the flaming sword for himself and the Giant's rings are split among the party, which they wear as crowns or armbands.

As they loot the corpse, yet another Fire Giant poked his head out from another curtained alcove and shouted in shock at the site of his dead companions and Chief.  He rushed back behind the curtain.

Fearing another attack from the Fire Giants and naturally concerned over their weakened state, the party decided it best to try to hide and recover.  They sought shelter behind the curtain of the Giant Chief but only find a dead-end.  A search for secret doors turned up nothing.
Suddenly, they heard angry shouting coming from the main hall.  Arg peeked out from behind the curtain and  saw that the Fire Giants are arguing among themselves and that the two strongest began to fight each other for the right to be chief.  Letting the fight play out, the party watches as one of the giants is defeated and the other claims chief.

Arg decided to go out and challenge the new Fire Giant chief.  He stepped out with the flaming sword and the rest of the party follows, walking in a uniform line across the hall towards the giants.  Arg challenges the new Chief to a one-on-one duel for the ownership of the Giant's Flaming Sword.  The challenge is accepted and the party and Fire Giants circle around the the two combatants.  Thenus slips Arg a gourd of speed to aid in his combat and the battle in engaged.  Arg matches the Fire Giant blow for blow, both wounding each other but both not giving in.  Suddenly, the flaming sword flies from Arg's grip and is picked up by another giant.  Grop casts a web around that giant with angers the other Giant onlookers who start to push and attack the party.  Sir Gwain tosses his Ice Blade to Arg who caught it and then cut the leg off of the giant and then beheaded the mortally wounded creature!  In a rage the rest of the Fire Giants attack.  In the battle, Wang fell, mangled and dead, but not before he stunned one of the Giants which was quickly dispatched.  Biggs also fell. With everyone near death, the nearly finished party with one last effort dispatched the remaining Fire Giants.  They are once again victorious!

In no shape for another battle, the party gathers their wounded and exits the fortress and heads back to the hidden village of the Firbolgs....
Posted by bliss_infinte at 3:10 PM No comments:

With McDagger invisible and tiny Gorp just inside the giant iron doors to the entrance of the ancient dragon Agatheron's lair, the rest of the party peered in and saw a massive hall almost one thousand feet long.  At the far end were five fire giants.

As they discussed what to do, eventually one of the giants started to head towards the open door.  Hiding on the outside, they prepared to ambush the lone fire giant. When the Giant stuck his head outside the party attacked, but not before he screams out a warning.  The Giant, however, stumbled and the party hacked him to death.

They dispatched the two Giants and enter the grand hall.  Searching behind massive curtains they found a ballista. Lothar rolled it out into the hall as Arg and Wang Du searched the hidden alcoves for more.  They noticeed that Koshan had disappeared by turning himself invisible.

As they made their way up the hall, a distant alarm sounded and the party prepared for battle with the Giants. 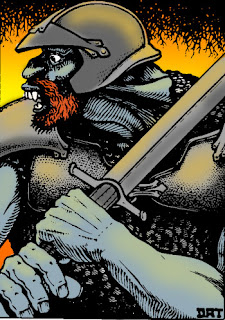 From behind a curtain rushed a number of Fire Giants.  Gorp tried to fry them with a Fireball but the giants only laughed and charged on.  Arg and Wang fired off their ballista as does Lothar damaging two of the giants.  Gorp blastsed them with cold, wounding a number of the Fire Giants.  Finally the two groups engaged in hand to hand combat, Thenus firing damaging arrows to her favored foes.

Meanwhile, a Beholder appeared out of nowhere and shocked the party into fear until they notice that the magical beast started attacking the Fire Giants.

There was one robed Fire Giant that raised a wand by the Beholder turned him into a giant rat.  Koshan, now in his true form as a Ogre Magi, and McDagger attacked the Giant Rat and eventually kill it.

Arg and Wang charged the giants and the fierce battle continued.  Another blast of frost from Koshan defeated some of the Giants and Todashi almost fell to their attacks more than once. Sir Gwain saved him but has trouble fighting the Giants as he keeps dropping his magic sword.

Suddenly, two Hell Hounds burst from the curtains and attacked McDagger, killing him.

Eventually, the party prevailed over this initial onslaught of Fire Giants. Su raised the dead McDagger who hobbled out of the hall shaken and wounded.

Surely there are more that lie in wait...


Posted by bliss_infinte at 2:46 PM No comments:

Having finally exited Hidatha's maze with his enemy Koshan as their new ally, our fearless party once again headed north towards the Grey Mountains and their face-off with Agatheron, the ancient red dragon claiming dominion over the land.

One evening at camp, Thenus shouted out a warning as the ground beneath their feet shook and opened and out crawled a group of Giant Ants.  The party responded and soon dispatched the insects. They resumed their rest and soon also their journey.

Entering the foothills, they saw in the distance the twinkling lights of a small village.  Su knew this village to be Litafjord.  They decided to make for the village and rest there before their final trek into the pass.  Upon entering the village, however, they found it to be mostly deserted save for the Craggy Inn run by the inkeeper and his dwarven wife.

The party learned that everyone had left the village on account of the reemergence of the Dragon and that he had gathered an army of Fire Giants to aid him.  The stubborn Innkeeper had decided to stay along with the village's lord, Lord Boomish.  Thenus recalled having worked for a Lord Boomish a while back in the town of Berkenstok when they recovered the family shield from the Ruins Beneath Xlarthan's Tower (back in session 75). They learned that this Lord is a cousin of the one that they had previously helped.

The next day they met Lord Boomish and he recognized the party as the ones that recovered his family's shield from the ruins beneath Xlarthan's tower.  The shield was used to defeat the dragon with Lord Blackmoore many years ago.  Lord Boomish decided that it is his destiny to face the dragon one last time and will aid the party.

The next day the party, along with Lord Boomish, left the village of Litafjord and head out into the mountains. They soon ran across the corpse of a fire Giant with it's head on a pike. Examining the ground for clues, Thenus discovered a trail leading off the path and into a canyon.  Following the trail, the party soon got the feeling that they were being watched. Arg shouted out their hatred for the Fire Giants and soon after, a Firbolg steped out.  The party befriended the giant hill people and were welcomed into their village.

They learned that the Firbolg's have been attacking their enemies, the Fire Giants, every chance they could.  The Firbolgs will not attack the Giants directly as the Fire Giants are too strong and are using hit and run tactics to weaken their enemies. The Firbolgs decided to help the party and will lead them to the entrance of the Dragon and his army.  One Firbolg, Lothar, volunteered to join the party and help infiltrate the Dragon's lair in search of his missing brother that was captured by the Fire Giants.

Lothar lead the party through the canyons and into the mountains and one evening they are standing before a pair of massive iron doors.  The great doors, outlined with a glowing dragon are discovered to by barred from the other side. Su turned McDagger invisible and uses his magic to unbar the door.  Arg and Wolf pushed the iron door open just a crack and Su and McDagger slip inside. The rest of the party peered in and saw and expansive long hall lit by torches made of trees.  At the far end were a number of Fire Giants....
Posted by bliss_infinte at 2:12 PM No comments: