Players be warned - Spoilers Ahead! 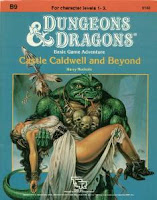 The B9 module, Castle Caldwell and Beyond, in my opinion, may not have been one of TSR's most creative modules. Having come out in 1985, it was after I had stopped gaming and moved on to other things. I never owned the actual module but I did pick up some of these included adventures in the B1-9 collection, In Search Of Adventure. 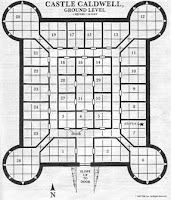 The module itself was a series of five loosely connected adventures for beginning players using the Moldvay Basic Rules. The entire concept was not a bad idea as it could easily be turned into a mini campaign, however the execution of the adventures left a lot to be desired.

Now I don't consider the the first adventure of Castle Caldwell itself to be that awful. It's a basic hack-n-slash clear the castle scenario, and there are some elements that one could expand upon; the evil cleric for one and the thieves can be used for some role-playing. The one thing that kills this adventure is the very un-inspiring castle map (see above map). I've always hated that layout and seemed to me to be unimaginative, dull, and unrealistic.

So what to do? Make your own map.

So this is the map I came up with for the main level of Castle Caldwell. First off, you'll notice that I got rid of the boring box corridor and the rearranged the monotonous rooms and doors, I split the 30+ rooms into two levels, I removed some of the repetitive empty rooms and finally I added an additional room or two to pad things out. I've also combined a couple of the rooms and you will see these numbers on the map divided by a slash. In this case, combine both room descriptions into one making the various changes required. You can click on the image to the right to view and then download the large map if you are interested.

For obvious copyright reasons, I cannot post the contents of the module here. If you have the module or the In Search of Adventure booklet, you can match the room numbers up with the room descriptions, I use the same numbers on my map. You will have to use your common sense and make various changes to the descriptions in the existing module to adapt to the new map, for example, light coming in from windowed walls, the shelves in the current room descriptions, etc.

I feel that this adds a bit more variety to the map layout.

I have added additional room descriptions below that I felt may be useful.

The outside entrance is a grand pair of ornately carved heavy oak doors with iron rings door handles. The doors are not locked and open inward into the grand hall.

AA. GRAND HALL - The light from the outside streams through the front door and into a grand hall; a 60' X 40' room with oak doors in the center of the east and west wall, with two doors in the east and west corners of the north wall and a pair of double doors, 8 feet tall in the center of the north wall. On either side of those doors are two tapestries aged and worn and in tatters hanging from the wall. Inlaid in stone upon the center of the floor is a crest of a blue shield and a white sash running diagonal. The top portion of the shield there is a castle and the bottom half has a dragon. On either side of the entrance doors are steps the lead up to a 10' wide balcony held up by four stone pillars that run along the east and west walls respectively. The ceiling is vaulted over thirty feet above your heads.

The tapestries show two dragons facing each other. They are in tatters due to age and neglect and are worthless.

There is nothing of value in this room.

1. DINNING ROOM - This room appears to have once been used as a dining room. There are two long wooden banquet tables and numerous chairs and benches strewn about the room. Scattered on the tables are a number of eating utensils, forks, knives and spoons along with wooden bowls and metal plates. 15 feet above the floor is a 5 foot wide balcony running the perimeter of the room (CC). Everything is covered with dust and cobwebs.

In one corner of the room is a pile of chairs that look more placed than randomly tossed about. There is a sack that contains 500 sp and three gems, one worth 300 gp and two worth 50 gp. The gems cannot be seen unless the contents of the sack are dumped out.

6, 12, 20 TOWER ROOMS - This the base floor of the tower. There is a spiral staircase in the center of the room which ends at a wooden trap door in the ceiling. There are ports spread throughout the walls for arrows to be fired. The room appears to be empty.

This the upper floor of the tower. There is a spiral staircase in the center of the room which down to the ground floor and up to end at a wooden trap door in the ceiling. There are bones of two tiny humanoid creatures on the floor.

14. TOWER ROOM - This the upper floor of the tower. There is a spiral staircase in the center of the room which down to the ground floor and up to end at a wooden trap door in the ceiling. The room appears to be empty.

A crab spider is clinging to the ceiling when the party enters, and drops down on a party member (choose at random), surprising on a roll of 1-4 on a 1d6. If the crab spider makes a successful hit, the victim takes normal damage and must then make a saving throw vs. Poison (at +2 because the spider's poison is weak) or die.

The trap door leads up to the roof which is empty.

31A - There is a 40% chance that the wolves in room 31 will be on this level and immediately attack. Otherwise it will take the wolves 2 round to move from the upper level down to the ground level and attack.

CC. DINNING ROOM TERRACE - A balcony over looks the Dinning Room (1). The secret door to DD can only be accessed with the key found in room 10.

DD. TROPHY ROOM - The trophy room can only be accessed by using the key in room 10 to open either one of the secret doors. Inside the room are treasures and trophies from the original inhabitants. The GM in encouraged to populate this room with treasure and monsters appropriate to his/her imagination or campaign.

I know this may not be the best way to present an update to an existing adventure but I hope it does help spark some imagination.

On a further note, the lower levels of Castle Caldwell, in my opinion are not that great either, but instead of recreating that portion, the pit beyond the locked door in room 21 leads to the Store Room level and the beginning of the Castle of the Mad Archmage adventure written by Joseph Block over at Greyhawk Grognard.
Posted by bliss_infinte at 10:16 AM