Has it really been that long? Indeed, it has.

The Christmas of 79' brought memories of the monstrous Chicago blizzard from earlier that year and delivered to me the next evolution in my gaming history. 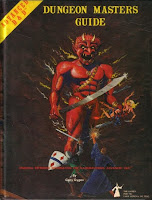 Yes, that started with TSR's Dungeon Master's Guide. I didn't know what I was getting myself into. And despite my falling math grades (I was just drawing dungeons in class) my parents picked up the guide that set a standard for all rule-books to come.

I was looking forward to the "Advanced" version of the game, that's what everyone was moving towards at the time. I even had the TSR S2 module 'White Plume Mountain'. Though I had been playing Holmes 'basic' for the past year and playing it wrong for the first six months, I felt that it was time I moved up with the big boys, I felt that I was an 'Advanced' D&D player.

Well, of course, as a youngster, I was overwhelmed with all the rules. What I think I really wanted was the Player's Handbook which had details of all the different character races and classes. But I was, at this time, still acting as DM for my friends who were just starting to follow my lead so it was the DM guide for me. The hard book cover screamed "I'm an Advanced gamer now, so enter at your own risk!"

Though the 1st ed Advanced books are fantastic and classic aspects of the game, I have always found those rules to be too heavy. I would always go back to Holmes, sprinkling a bit of the Advanced rules in here and there. The simplicity of the rules are what kept me there. We played D&D religiously the next year, but 1980 would introduced new games to my universe.
Posted by bliss_infinte at 10:49 AM