Session LI: Thieves in the Temple

It's been months since out group has played Swords & Wizardry having taken a break from that game to play some board games and play in a Robotech game that Mike, a game-group player from the start wanted to run.  We just got back into S&W earlier this week.  My plan is to run shorter installments of the ongoing campaign with natural stopping points to give us the opportunity to play other games and to take a break from GMing.

So this campaign installment will center around the battle for Caladan, which was usurped by Morak backed by Kushanna's Stygian empire from the south.  Arvin's Avengers killed Morak and were chased out of Caladan by Utasu the captain of the Stygian forces and Zadir the Stygian wizard who both now rule the port city.  Having taken refuge in the city of Blackmoor and allied themselves with Baron Blackmoor have decided to retake Caladan.

Session LI:  Thieves in the Temple

For months, the troops of Blackmoor have cut off access to lands of Eri'an from the usurpers of Caladan and repelled the Stygian troops back into that port city.  The siege of Caladan has begun.

However, flush with victories and a full mercenary purse fighting as a free-sword for Baron Blackmoor, celebrations were uproarious and rowdy.

With some drunken shenanigans, that involved freely flowing ale, a handful of whores, spoken insults, thrown punches, overturned tables and the inadvertent burning down of  a beloved White Sheppard Inn, the group, along with some 'innocent' patrons stood before Baron Blackmoor who was none too pleased with their actions.


To forgive their transactions, the Baron asked them to recover a small circlet that was the sole item stolen from his treasury by a group of thieves the night before.  It turns out that these thieves were hired by a wizard named Varnagon to recover this seemingly worthless trinket.

The trail of the thieves lead to an ruined temple not far from the city and that's where we found our part; Wolfheir the Viking, Gnarly Blunderbrush the Druid, Arg the Half-orc, Skwanky the Halfling warrior along with two newcomers; a spell-caster by the name of Maximus the Untested and Thoven Brightsmith knight of the Black Church.

At the ruins, Gnarly sent Tuk the owl up to investigate and found a wounded thief about to be eaten by two hungry wolves. If fact the entire party was surrounded by a pack of wolves.  But the druid calmed the situation down and talked with the pack leader.  The alpha told Gnarly that there were about twenty thieves holed up in the basements of the ruin.  Gnarly promised to send them out so that the pack can feast upon the invaders of their domain.

Moving in to question the mortally wounded thief, they found that his boss Varnagon went mad and summoned up fiends from Hell to slaughter he and his companions.  Of course they found this out by torturing this poor soul. Take heart, though, as he was put out of his misery by Maximus the Untested!

Entering the basement crypts they happened upon a handfull of armored skeletons munching on  a couple of the dead thieves in front of a black and green metal altar.  Sending Skwanky the Halfling in to draw them out, Thoven Brightsmith brought these undead creatures under his control.

Sending the enslaved skeletons down a passage they fought with another group of skeletons.  With all the skeletons having killed each other but one still under Thoven's control the party continued down a set of stairs to find a passageway with a number of doors on either side.  The last skeleton lead them into a chamber filled with Zombies.  Pulling some of the Zombies under the Black Church priest's control the party defeated the rest.

Exploring the room, the party found a seemingly bottomless well, which they tested by having one of the zombies topple himself over the edge.

Deciding to explore the other doors, they came upon a crypt where the floor and wall had been busted up by roots and vines.  Entangled in the vines were the remains of an armored knight with a green gem.  Suspecting a trap, Thoven sent his final zombie in to retrieve the gem. The zombie was attacked and killed by the vines which then attacked the rest of the party entangling Gnarly.   To escape Gnarly planned on casting plant growth but was rightfully talked out of it by the rest of the party.  Instead, the druid turned himself into a raven and flew out of the room while the rest of the group set fire to the vines.

It was at this point where we stopped and will continue next time... 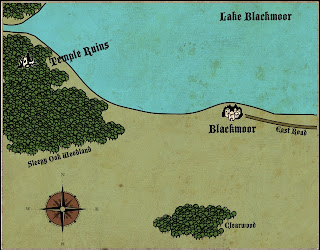 The Many Faces of Swords & Wizardry

I first picked up on the Swords & Wizardry vibe back in 2009 when I was exploring the blossoming OSR*.  I had looked into Labyrinth Lord and Basic Fantasy at the time but there was something about the title of Swords & Wizardry and the beautiful Peter Mullen art that really captured the game for me - the game I remember playing in my head as well as the game I wanted to begin playing again.

I had picked up the PDF version of the 1st edition S&W rules (along with LL and BFRPG) and was hooked.  It was the perfect set of rules for me.  Direct and to the point and a nice handful of pages, clear and concise and open for plenty of expansion and very much the same game I stared out with (Holmes).

Swords & Wizardry evolved of these brief years.  Since our S&W campaign is starting back up again this week I thought I'd take a look at the gallery of S&W rules. 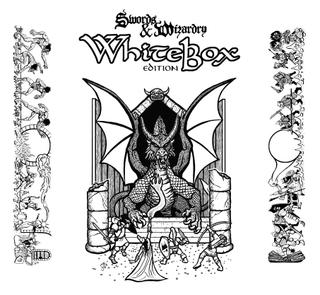 After a major hiatus from our Swords & Wizardry campaign (last session played in January), our group is once again taking up blade and dice to see what trouble can be had around the gaming table.  Look for new Session Updates to be posted soon.

*Now I know that tons of folks were still playing the original versions of the games as can be proven by the Dragons' Foot and the OD&D boards where I had frequented a year or two prior.  But with the so called explosion of these Retro-Clones the border for the 'Revival' had been drawn.
Posted by bliss_infinte at 9:10 AM 2 comments: