This material I put together for my Swords & Wizardry campaign but it's open enough for most Fanasty RPGs.

This 28 page free download is intended to keep track of the session number, session date as well as campaign dates. You can also add adventure notes, NPCs that the characters run into and any tiny plot hooks that come up. There is also a place to keep track of Treasure found, monsters encountered as well as their experience and hit points. And keeping track of time in the adventure can be challenging when there is so much else going on so check boxes for rounds and turns have been added.

As you fill this booklet up with your notes, add a volume number and begin filling up the next book, you'll have records of all your sessions as well as any tiny event that happened which can be referred back to in your organized volumes for new plot hooks and session ideas.

The new city guides are created to help with sandbox campaign note taking and planning of various towns and cities that the characters may explore. As I've mentioned before, my sandbox is just a very broad-stroke which I fill in as the players explore. Thus, notes were beginning to pile up all over the place and on all sorts of notebooks and scraps of paper. Cities were a special case as residents may come and go, items sold or traded from previous adventures would now be a part of this shops inventory. This booklet will help keep that organized.

It's a 16 page booklet with room for 20 building maps and descriptions, a page for the general city map and city notes such as government, trade, laws, etc and finally a numbered hex map of the general region around the city or settlement.

Timekeeping during dungeon exploration is a crucial component for any game session and it's up to the DM to note this detail. Time keeping is important in knowing when to roll for wandering monsters, how long a spell may last as well as the use of torches, lanterns and other PC resources.

This gaming aid will help the DM keep track of rounds, turns and monsters encountered during a game session. It's based on my Campaign Journal gaming aid but has been simplified just for time keeping during dungeon exploration. 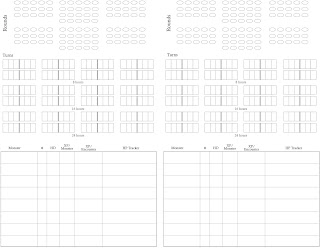 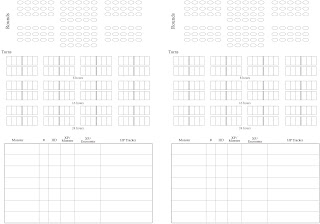 
Time keeping is just a mechanic of the game and doesn't have to slog down game play. If PCs explore a room for example, a turn is checked off and descriptions are given. A DM doesn't have to drag time out.  For more info on my Dungeon Time tracker....

Having used some home-made dungeon tiles in my last session and finding them to be quite fun and useful, I've altered my custom set more for general use. The tiles are gridded with roomy 1 1/4" squares which translates to about 5 feet in game scale and can be use with most any fantasy game edition. A great free alternative to map out entire dungeon adventures or just close combat areas. There are 4 sets to download all around 3MB each.

Just print these pages out on a nice card-stock, get yourself a paper-cutter and start slicing.

These files are all greyscale to help save on printing costs.

The Outpost On The Edge Of The Far Reaches 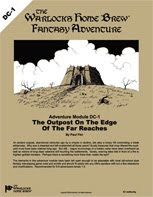 An ancient outpost, abandoned centuries ago by a empire in decline, sits atop a lonely hill overlooking a bleak wilderness. Why was it deserted and left unattended all those years? Surely treasures that once littered the courtyard must have been claimed long ago. But still... vague murmurings of a hidden cellar have been overheard as well as visions of long dead veterans still haunting the battlements. Surely tales told in the evening in front of a fire to frighten gullible travelers. Perhaps there is something more here than meets the eye?

The elements in this adventure module have been left open enough to be adaptable with most old-school style fantasy role-playing game rules and worlds and should fit easily into any GM's sandbox with but a few alterations and modifications.

Available for purchase and pay pdf download at the RPG Now.

Forgotten Tomb of the Warrior King

The one page dungeon The Forgotten Tomb of the Warrior King can be added to any campaign or amended to any dungeon.  Download the pdf file here!