It's been a pretty sporadic year for our Swords & Wizardry campaign. We're still trying to get into a rhythm of regular sessions and I think we're finally there. I've decided to do the campaign in smaller chunks of 3 or 4 sessions and then take a break.  Trying to save myself as GM and my players from burn-out.  This way it has been pretty fun when we get back into it. 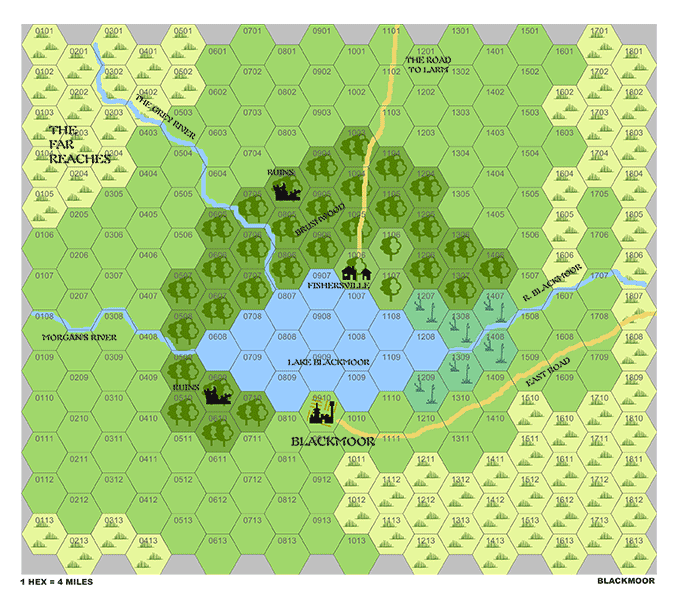 So after having 'supposedly' defeated the Spectral Scavanger and his headless dogs, our bloodied  party loots the chamber of it's treasure.  Maximus the Giant Slayer has the mysterious Green Orb in his possession. However, each member of the party has an odd feeling that things are just not quite right, that something is off with the battle* but they can't quite put their individual fingers on what that might be.

They headed back up to the main level of the ruined abbey and Maximus placed the Green Orb into the statue's hand.  Immediately, the dead vines attached to the statue began to turn green once again and very slowly spread throughout the rest of the chamber and the Abbey.  Also, a magical fountain began to bubble again and drinking from it healed all the party's wounds.

Comforting the frightened Jute, the orphan girl they found hidden in the Abbey after her family was ambushed by Gnolls, they hunkered down for the night but the night was filled with the manic howls of the Gnolls that surrounded the Abbey.

The next morning it was decided to try to make a break for it to the town of Fishersville.  Frightening the Gnolls with a swarm of insects cast by Gnarly the druid, the party broke for the forest and ran through the woods with the Gnolls in a distant pursuit.  Towards the end of the day they made it to the road but some of the Gnolls ambushed them. Defeating the beasts, Maximus cast an illusion of fire to keep them at bay.

Now on the road they hurried to Fishersville with the Gnolls closing in but the gate to the town was closed and the watch wouldn't let them pass after sunset.  As they begged with the watchmen, the Gnolls attacked.  Gnarly, fed up, turned into a bird, flew over the wall and obscured the area with a mist  and opened the gate for his companions.  Maximus finished off most of the Gnolls with a blast of lightening and Thenus and Eidan captured the Gnoll that made it past the gate.

The watch captain came up and reprimanded the his underlings for not letting the party in that were in need of aid.

The captain led them through town to the inn, the Bearded Clam, when they came upon a mob of folks wanting to burn her as a witch for claiming that Lord Blackmoor was dead.  Apparently all the townsfolk though him alive and well as did two sellswords how were no their way to join Blackmoor's army to fight against Kushanna's forces coming out of Caladan. The Captain broke up the mob and brought the girl under her care.

The party, after dropping off Jute at the Temple of Mithra proceeded to the tavern looking for a long rest.

*At the beginning of the previous session, I didn't have much planned except for a couple of quick one-off dungeons that I put together but the final battle at the end of that session was stacked waaaay against the players.  Now, I hate fudging dice rolls which I did  a lot when I was a young GM 30 + years ago.  I vowed that in this campaign there would be no fudged dice rolls, letting all the dice fall were they may, for good or bad, for or against the players or GM.  And I stuck with that, proud to say, until that last battle in that last session.  We had a TPK.  I had overpowered the players with virtually unbeatable foes without any warning or hint as to what they might be up against.  I blame that fully on poor GMing on my part.  So after the very upsetting TPK, I retconned the battle for a redeux bringing in PC's who's players weren't present.  And after a few fudged die rolls the players were victorious.  Now,  I felt bad that I broke my own rule about fudging die rolls and I hate retcons.  So after a bit of thought I rolled that whole concept into the campaign.  Having two opposing forces of law and chaos battling through the party with law 'cheating' so to speak by bringing the party back to life, cheating death and chaos of it's victory and in the end, upsetting the balance of nature.  This helped me settle with the retcon by working it into the campaign with some negative benefits for the party and actually breaking the campaign open quite a bit from what I had lazily planned in the first place.  I don't know how much the players are aware of things but I've been giving them hints and clues that something is just not quite right.  That should break open a bit more in the next upcoming session.  I feel this was a pretty good way to handle the in game retcon and am excited to see where this might take us!
Posted by bliss_infinte at 8:55 AM No comments: