There was a post on Joe the Lawyers blog about playing James M's infamous Dwimmermount dungeon and the tedium of exploring empty rooms.

So called "empty" rooms in dungeons have been a part of the game since it's beginnings with every classic iteration of the rules' original authors (Gygax, Holmes, Modvay)  having added it to their dungeon creation process.  In general, roughly 1/3 of the rooms should be 'empty' while the rest are filled with monsters, monsters & treasure, treasure and tricks or traps.  Delta's D&D Hotspot has a great summary of this dungeon stocking process from the early rules and supplements worth reading.

What exactly are 'empty' rooms?

I like to think of an 'empty' room as another type of dungeon encounter. It is my feeling that empty rooms shouldn't be empty at all and most aren't but they should have something of interest for the PC'.

Dungeon philosophy falls into two general camps; Dungeons as a realistic setting and dungeons as a fun-house.

I prefer the dungeon as a fun-house with a sprinkling of realism thrown in. A journey to the Underworld should leave the players in an unexpected environment where anything can happen and the usual rules don't apply.  You mix 'realism' up with some wacky goings on, your players will always be on their toes not sure just what might happen next. 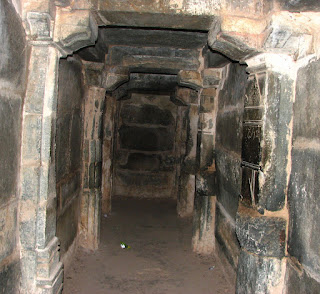 "Empty" rooms can help with that if you think of empty as being just a concept.

As you all know, I've started my campaign with Holmes' sample dungeon.  What's great about that dungeon is that it has a good mixture of monsters, tricks and traps but it also has an abundance of empty rooms.  These empty rooms are not keyed or anything, they're just empty rooms.  There was always a good chance that players would just hit empty room after empty room which really made exploration a bit dull.  Sure, there might be an atmospheric aspect to tossing in a gloomy empty room every now and then but to have that happen more often than not can make for a tedious session or two.

I always disliked the empty rooms in Holmes' dungeon and it wasn't until this recent campaign that I keyed the rooms in myself. I feel that no room in a dungeon should be just empty, there should always be something in there to reward the players or set them back, but in just a minor way;  a found key (could be to a room in the current dungeon or used by the DM in the future), a weird reflective mirror that shows the PC's as the opposite sex; anything to get a brief laugh at the table or make the players stop and think.  Anything to just break up the monotony of killing things and taking treasure but more than just exploring rotting furniture.

With low level dungeons it's easy to fill in 'empty' rooms with items players might need like torches or barrels of food or wine but here is where you can get fun and creative with things to just freak the players out.  Why waste an opportunity for some role-playing and table fun.  Plus PCs waste game time examining the room allowing for additional wandering monster checks - but give the players something to think about.

Some of the things that I've added to the empty rooms in Holmes dungeon include:
Most of these were just quick minor afterthoughts (well, a little thought was put into it). An 'empty' room is a great game opportunity, as DM don't let that pass you by.

Pretty much you can do anything you want here. Let your imagination just have fun - the players will too.

There are plenty of resources out there to get you thinking about fleshing out those 'empty' rooms.
So for some stocking ideas here are a couple of resources that  can help you fill in the so-called 'empty' rooms and give your players something to brag about at the tavern:
That said, I don't like purchasing a dungeon where the author has keyed half the rooms and leaves the other half for the DM to flesh out.  I expect the author to do that, that's why I'm picking up someone else's dungeon.  I have no problem adapting a fully keyed dungeon to my needs within a campaign. If I have to key half the dungeon I'll make my own, thank you very much!
Posted by bliss_infinte at 9:30 AM