Having battled and decimated a camp of hobgoblins and freed a prisoner, Throckmorton, a priest of the chaotic god Khalk'Ru the Destroyer, the party continued through the woods. At dusk they discovered some very ancient ruins smothered in the overgrowth and spent the night hidden amongst the rubble.  In the morning they explored some doors and rooms of the ruins coming upon a pristine and peaceful open air garden containing a large pool and a magic fountain...

After everyone had a taste of from the fountain with varying effects, well, all except Gnarly the Druid, Wolf discovered a secret door that lead deeper into the ruined structure.  There they found a door and upon opening were greeted by a garrison of hobgoblins and goblins.  Arg the half-orc, looking to test his newly acquired strength (raised to 20 from the fountain) and along with Skwanky the halfling warrior eagerly greeted the incoming onslaught!  After loosing their weapons the two began to just pummel their way through their enemies. 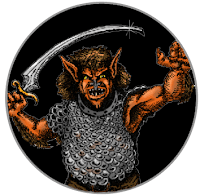 With one hobgoblin captive, they "persuade" a map to the throne room out of him and he guides the party beneath the ruins and into the underground complex of the hobgoblin king.

Sneaking through the hallways they are waylaid by two Bugbear guards whom they defeated.

Finally making their way to the throne room they burst in (of course) and dispatch the guards and begin questioning the king about his alliances between Lord Blackmoor or the followers of the Black Sun.  Having been "backed into a corner" by an emissary of the dark cult, the king felt there was no choice but to ally with the cult.  Televon talked the king into turning on the Dark Sun cult and the king called to his guards to bring forth the emissary who was making a temple within the kings dungeons.

But the guards not only returned with the Black Cult priest but also with armed hobgoblins!

A fierce and bloody battle ensued in the hobgoblin throne room and finally ended with the hobgoblin king dead and a berserk Wolf the viking pursuing the retreating hobgoblins down the hallway!
Posted by bliss_infinte at 9:00 AM