About a year ago I was in search of some kind of quick and easy yet accurate skirmish rules for use in our Swords & Wizardry campaign.  There was a large battle coming up between our heroes and some rebel watchmen of Caladan and a small army of undead and I wanted not to have to roll the entire combat out.

At the time I experimented with the S&W mass combat rules but they didn't quite work for me.  I mixed that up a bit with simple streamlined Mass Combat rules created by Justin from Old School Psionic.  I also looked at Song of Blades and Heroes.  None of these quite worked for me.

I even looked at Warpath, a Pathfinder supplement for larger scale combats but I have to admit I was turned off by, what I felt were overcomplicated rules and cross rules.  There is no way I'd remember any of that in this day and age.

I ran some skirmish combats on my own and just wasn't totally enthusiastic about any of it.  I wanted the larger combat to flow seamlessly in and out of the general campaign play at the table.

Alas, I ended up running the combat in game at the table at regular scale.  It didn't hurt the session at all and everyone seemed to have a good time during the hack and slash battle (though it did take a session and a half).

Always in the back of my mind I hoped to find a set of rules that I can easily adapt to the campaign.

With another possible larger scale battle looming in the distant horizon I've returned to seeking a solution to Mass Combat. 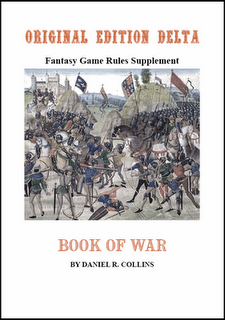 I think I may have found it in Daniel Collins' Original Edition Delta Book of War.

I don't know how I missed these rules (or this blog, it's filled with plenty of useful classic D&D info).  I like his philosophy on creation of these mass-combat miniatures rules, compatible with original D&D and similar systems.

Apparently this has been a quest for "Delta" for many years and he released these rules late last year.

He seems to have put a ton of thought into the scale and balance of his mass combat rules to fit seamlessly into an OD&D campaign and it's ilk (or to be played on it's own).   In fact, one might even say that Book of War is a direct descendent of the original Chainmail.

With simple d6 mechanics that mirror the results of actual played out combat at full OD&D scale it appealed to my rules lite mentality.  The rules also covered Heroes, Wizards and Magical Creatures.

I read through the compact 24 page set of miniature rules this weekend and was pretty enthusiastic about it.  I'm giving it another read now and will probably run some test skirmishes later this week.  I'll keep you posted on my findings.

If you're looking for some mass combat rules to fit into your campaign you  might want to give Book of War a look.

Posted by bliss_infinte at 9:45 AM