Anyone who has been keeping track and downloaded my Campaign Player's Handbook (houserules for my Swords & Wizardry campaign) will remember that there were a couple of holes yet to be filled; namely the Atlantean and Stygian race descriptions.

Mike (MilkManX and one of my players) had some ideas for these races so we sat down and worked out the Atlantian and the Stygian (with obvious nods to REH) the later of which is still being worked on a bit, mostly how spellcasting is handled by the race. I'll post that one as well as we finalize the details. 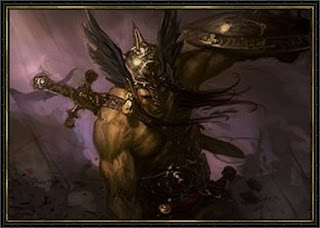 Race: Atlantean
Atlanteans are a very ancient race decedent from a pre-cataclysmic age. Their numbers are few as their race dwindles though they have retained their high culture through the ages. They are quick to anger and can be quite barbaric in their savagery and have a strong distrust of magic and the supernatural.

Attribute Adjustments
Atlanteans gain a +1 to Strength and a+1 to Dexterity and a -1 to Intelligence and -1 to Charisma.

Save Bonus
Atlanteans gain a +1 against to save against cast spells of a sorcerous nature.

Class Restrictions
Atlanteans can be either Fighters or Thieves. On occasion (25% chance for PC class) they may be a Druid which this race calls a Shaman. They do not gain any experience bonus for any class.

Alertness
Like Rangers, Atlanteans reduce their chance of being surprised by half.

Limited Wealth
Atlanteans may only own what they can carry with them, spending the rest on wine and women.