There is really something alluring about a nicely painted mini on the table during a session.

That said, there is great personal preference if minis add or detract to classic game play. I think it depends on where each player is coming from. The key is to find a balance that all players can appreciate.

When my brother and I first started out with FRPGs with the Holmes blue book we definitely took, how shall I say, a unique path to the game. Over time Minis fell from favor in my book. A big reason for that was time and money involved putting together a collection.

So present day, in our current Swords & Wizardry based campaign, I have experimented off and on with minis. To be honest, most sessions ran perfectly fine without them. Even many of the combat encounters flowed pretty well. As our table grew (we're now up to 7 players) and we have NPCs, a five Mushroom-man army and an array of monsters charging the party, as DM I'm finding it easier to keep track of things with some type of representation on the table.

I've experimented with just the player minis and odds and ends on the table to represent the monster (usually dice). And that's fine but if you go to that point, then why not have something more accurate represent the monsters? We're back to talking about minis once again and as I mentioned above, as cool as they are, there's time and money involved putting it together. What if you roll that encounter that you don't have a mini for? Back to the dice?

So looking for a way to incorporate a type of mini back into play I tried adding paper minis to the table. I've been thinking about paper minis for a while and there some good resources out there, One Monk for example. They're cheap and easy to make. Problem is, they're made of paper and most likely won't last more than a couple of sessions. 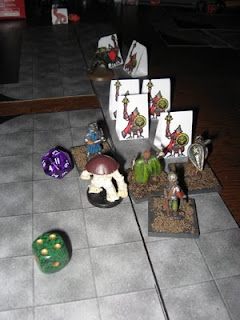 Now having our party represented at the table as well as the monsters made the ever more complicated combat kinda fun and easier to manage on my end. For the last session I also created some Dungeon Tiles for the Temple Adventure which I think worked out pretty well too.

My mistake came from constantly using the tiles and minis during that session to move the players through the dungeon, even for just exploring. Again, I think some players liked that and some didn't like it as much. So again, a nice balance needs to be presented.

That balance appears to me to not rely on minis during the general exploration of the environment and then use them for the more complicated combats. Some of the smaller combats won't even need them I'm anticipating. I think that would keep the game more in peoples heads and less on the table.

Now, back to the minis themselves. As I mentioned, the paper minis, though quite adequate, most likely won't stand up to the test of time. One solution I am kind of keen on at the moment I found over at Drance's Once More Unto The Breach blog. The concept of using washer tokens as representation on the table seems to be an inexpensive yet practical solution. His additional link to Newbie DM finalized the concept for me.

So that will be my next new path for PC table representation. I'll keep you posted on that progress. I have some ideas in addition to that that I'll peruse as well. Maybe this isn't 'old school' enough for some but it's practical and economical. Don't get me wrong, I love minis, and if I see something I like for a good deal I'll pick it up but the general time involved to do the mini justice is really not at my disposal at this time.

As a side-note on the dungeon tiles, I'll be putting a general dungeon tile booklet together for download sometime next week.
Posted by bliss_infinte at 9:15 AM