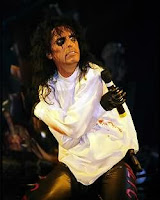 Exploring deep dark places can be quite trying to the psyche of even the most stout warrior. After being stressed in the confining tunnels of some rancid tomb and facing horrific death and beasts only believed to exist in nightmares can be enough to tip anyone's scales into madness. Toss in some mutant demon leaping from around the corner and they're carrying you off to the mad-house.

Here' a reaction chart for those failing any type of sanity save.

1. In Shock! Drops all held items and stands in a passive catatonic state. Totally helpless and useless.
2. Screams uncontrollably, attracts wandering 'guests'. Will attack anyone who is near or comes near him.
3. Runs screaming in a random direction, shedding items behind as he goes until he is completely without items or clothes
4. Begins raving and drooling.
5. Drops into convulsions and foams at the mouth.
6. Becomes paranoid. Thinks everyone is an enemy out to swallow his soul. A very dangerous person to be around.
7. Begins to talk to himself and is delusional. Looses connection to reality.
8. Looses all sense of self.
9. Becomes another personality (determine randomly or GM choice).
10. Begins speaking in tongues and becomes violent
11. The voices! The voices in my head! The voices tells him to do stupid and dangerous things. Not good to have in the part.
12. Becomes blind, deaf, and dumb.
13. Has an obsession with eating bugs and freshly killed things.
14. Urinates self and stands there helpless in catatonic state. Violently resist any attempts to move.
15. Begins clawing at own flesh. Sustains 1d4 hp damage every turn.
16. Can't stop pleasuring his/her self.
17. Begins hitting head against wall until unconscious (Sub-dual hp zero).
18. Starts sobbing uncontrollably. Becomes totally helpless and defenseless.
19. Seeks out the smallest, darkest place and refuses to come out (cave, nook, under a bed, etc.).
20. Believes the end is near and doom is upon us all. Becomes fanatical in this belief.

Remember any screaming or tantrum attracts wandering monsters.
These affects can last as long as the DM deems appropriate from a number of rounds (3d6) to a number of turns (1d6) .Quite and peaceful rest becomes the only cure.

Posted by bliss_infinte at 8:40 AM