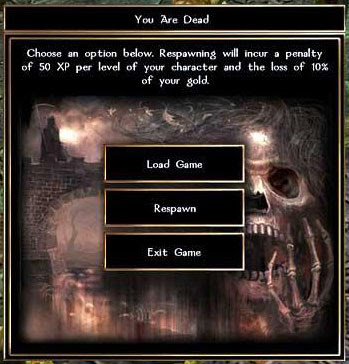 We had our first character death at Monday's Swords & Wizardry session. Arvin Ardmore, adept of Mithra went down swinging against the treacherous Sgt. Morak of the Caladan watch. Now, we've had some very very close calls in the previous sessions but all the characters pulled through, albeit quite bloodied and worse for ware. But now we've hit that infamous milestone. There was, indeed, a hush around the table.

There is nothing that really puts an emphasis on character mortality than the knowledge that death can be lurking around that next corner or through that next door. That, after all, is what makes the game exciting. With great rewards come great risk. And how much sweeter the reward than to escape the clutches of death by mere inches! The chance of character death is a grand necessity in most any RPG, otherwise there is no real tension, no real accomplishment and no real reward.

The player, Corey (Level 1 Gamer), took it in stride but there was definitely a pause at the table while it sunk in. I think everyone realized that each character is fragile (at least at 1st level) and the dice (fate) are a fickle thing but this event really puts an exclamation point on it. In fact, I was talking with one of my players last night and he said that he thought it couldn't happen. I like that. This is definitely no video game with a click to 'respawn' button.

We're all sorry to see Arvin go but at least he went down swinging. Well, get those d6 warmed up, time to roll up another character!

Full session recap coming shortly...
Posted by bliss_infinte at 9:00 AM