The Diversity of RPGs

Over at The Word from the Outpost, a blog from Imperial Outpost Games in Phoenix AZ, they have an interesting post on their RPG sales breakdown. They have charted and broken down the genres and RPG game lines with some interesting results.

Let's take a quick gander at which genres are selling the most. Now, this isn't much of a surprise. Fantasy RPG's are the market staple. (thank you Mr Tolkien, Mr, Howard, and Mr Lieber). In the store we have D&D and Pathfinder taking up much of the burden of fantasy RPG sales, but there are a few others contributing to that. Earthdawn, Exalted, Warhammer Fantasy Roleplay and a couple of the Indie games also added into that. SciFi games came in second with sales of Traveller, Dark Heresy, Rogue Trader and a few other minor ones.
Now for the chart that probably will be a big surprise. I know that it was for me. 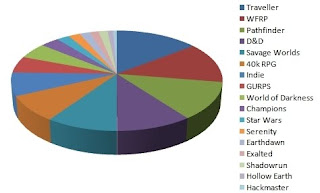 Yep... not only was D&D NOT number one, it wasn't number two or three either. It came in at number 4 and from the looks of the chart, it sure wasn't too much higher than the number five, Savage Worlds.... (read more)

It would be interesting to see how this trend is across other gaming communities, but I have a feeling it would not be too much different.

Back in the day (and by that I mean the late 70's) RPGs were few and far between. Of course there was D&D, Tunnels and Trolls, Gamma World, Traveller, Boot Hill and a few others. It was generally a broad-stroke of medieval type fantasy, Sci-Fi or Outter Space. Of course there were a few others out there that people would play or buy but just a handful were the staple of most gamers repertoire. For the most part, D&D was king of the castle. The gaming community grew up around this powerful core, the roots of this great tree. As time passed, the roots grew deep and the branches tall. The one thing about these games, though, was that they could be altered or tweaked to fine-tune them into something more specific to the players tastes. But under the hood, they were all, generally, from the same game.

As RPGs evolved over the years (for better or for worse), there is now practically a RPG rule-set for just about any sub-sub genre of horror, sci-fi, fantasy or 'other' that exists or doesn't exist. This diversity, although good in and of itself, creates a splintering of players and groups. Cross-pollination of ideas or interests is less apparent as groups and genres become more isolated from each other. Though the world-wide gaming community is perhaps larger than ever, it also makes it smaller with everybody in their own little niche.

What does this all mean? Who knows? Perhaps it means that RPGs will just go rolling on for many a year but I doubt if we'll ever see that big wave of a unified interest where one game 'rules' them all.
Posted by bliss_infinte at 9:28 AM