Jumping right into the action, the giant Roc from the end of last session was swooping down upon our weary adventurers.  Arrows flew to slow down the beast but the over sized vicious bird grabbed the young Magic-user Kray Rouis and tried to carry him off.  However, a lucky arrow stunned the poor bird and he tumbled into the snow. The party unceremoniously hacked it to death.  Wang Du took the beak as a souvenir.

The party traveled back to Berkinstok in hopes of reviving their fallen comrade Torvin the dwarf who fell to poison gas busting open a chest.

In town they hurried through the onlookers surprised to see them return from the dungeon and proceed to the Temple of Mithra. After a hefty donation, the high priest raised the dwarf from the dead.

After the usual drinking and resting at the Hacky Shack inn, the party visited the wizard Mystor who was Kray Rouis' mentor.  They tell the master wizard the sad news of his apprentice's demise.  They then asked the wizard about the magic sword that they had left with him to research. Mystor told them that is was a very powerful blade called Mindshiv.  It had many magical powers the least of which was telepathy.  The sword was given to Centari the elf.

The party rested in town for a number of days preparing to, once again, journey into the underdark but only a few days after their return, another party that had forayed into the dungeon depths and haven't been heard from in over a year, walked into town lead by Sir Fumark the Foul!  The weary and beleaguered party regale tales of battling an entire city of Hobgoblins.  The party listened to their tale knowing that Fumark was lying but the townsfolk ate it up the tales of high adventure!  Torvin the dwarf called them out and Fumark and his weary men almost come to blows with the dwarf but Thenus stepped in and settled the argument.  Knowing that the brood of Medora, the slain dragon, is looking to reap vengeance upon Fumark, Thenus told Fumark that they too had explored only the first level on the dungeon and would be interested in a joint expedition to find the supposedly unguarded dragon treasure.  Fumark agreeed but Centari, using the sword Mindshiv, discovered that the shifty Fumark will betray them the first chance he would get.

Weeks went by as the group awaited spring to wash away the winter snow and cold.  With full provisions, fresh horses and new hired men, the large party set off to return to the dungeons beneath Xlarthan's ruins.

"Finding" the ladder that dropped the group to the 4th level where the dragons reside, Thenus lead the unsuspecting Fumark and his party to their doom.  They soon arrive at the entrance to the dragon's lair.... 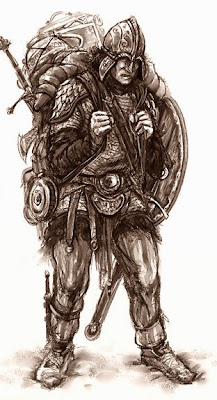 Posted by bliss_infinte at 9:00 AM