Ah, to have a cleric in your party when needed - which was not the case in Monday's session. The hints were there but who listens to their DM when there's slaying to do, right?

IN camp with the Watchmen, the rebel group of former Caldan watch members, Arg the half-orc, Flora the fairy, Gnarly the druid and finally joined by Wolfheir and Skwanky plot their rescue of Lord Osric who had been overthrown by Morak.

After much discussion it was decided to try to move the Watchmen to the Moontower which would involve crossing a guarded bridge and working their way around the outskirts of Caladan unseen. It was decided to go with the ol' Wookie in chains trick.

At dusk, Skwanky and Gnarly, after paying a toll, crossed the bridge and hid in the woods on the other side but not before being warned about traveling at night.

After a while, Wolf and his brigand followers dressed in stolen soldier uniforms, lead Arg and some of the Watchmen, as prisoners, to the bridge. There the guards question Wolf and Arg which goes something like this:

Guard: Where are you taking this...thing?
Wolf: Prisoner transfer from cell-block 1138.
Guard: I wasn't informed about this....
Arg: Look out, I'm loose!

And Arg proceeded to toss a bunch of the guards over the bridge. Meanwhile, Flora cast sleep on the rest of the guards rendering them helpless.

After some looting by Skwanky and more body tossing by Arg, the bridge guards were replaced by the five charmed soldiers from the previous session to cover their tracks.

Flora flew back over the bridge and gave the signal for the Watchmen to cross.

From here, the large group headed around the farmlands of Caladan. Edging the woods south to cross the Great Coast Road to return to the Moontower, they spot a lone figure standing in the dark in the middle of the road. Trying to get it's attention but to no avail, Tuk the owl and Flora fly out to spy who this might be. It turned out to be a ghoul.

Arg, loosing patience, walked out of the woods and approached the creature who turned to face the half-0rc and let out a fearsome screech! From the woods on the other side of the road rushed a literal army of hungry ghouls, former travelers and townsfolk of Caladan!

Arg high-tails it back to his party and the Watchmen while Wolf organized his men into defensive positions.

After burning the initial wave of undead, the ghouls rushed the group of defenders and a brutal battle erupted. The Watchmen along with Wolf and Skwanky on the front lines hack and slash at the fierce creatures who claw and gnaw their way through the lines of fighters.

The session ended with half of the Watchmen dead, half of the Ghouls dead and Skwanky paralyzed by the attack! 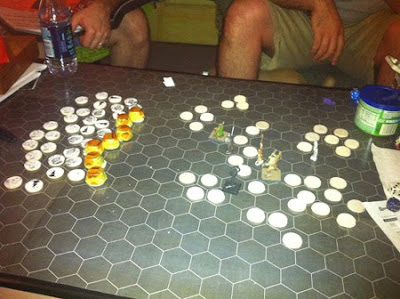 The beginnings of battle. The tokens with the peanut butter cups are ghouls ablaze! 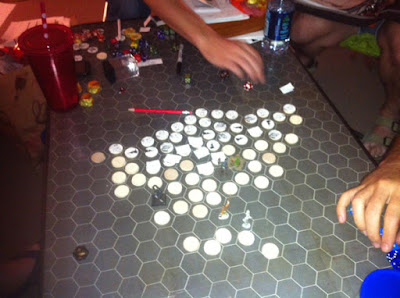 The faceless tokens are allies while the imaged tokens are the Ghouls. Slips of paper keep track of the monster's HP. We played the battle out completely - every monster and every NPC and PC.A rules lite combat make this possible. 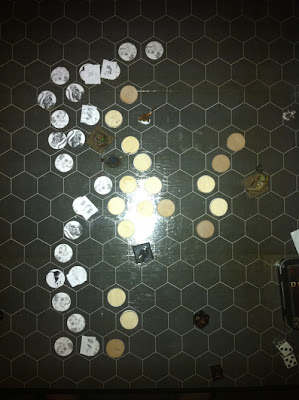 It appears that the ghouls are breaking through the lines...

To Be Continued....
(thanks to Zach and Corey for the war photo)
Posted by bliss_infinte at 8:30 AM