Entering deeper into Gimmwood in search for the tower of the Red Wizard, the party felt the oppressive vibe of the forest. Travel was easy, though, with the map that they had recovered from the Red Wizard's henchman back in the Were-Rat caves and, lead by Thenus the Ranger, good progress was made.

In the early morning hours of the third day, their nightly watches spotted a war-band of goblins and hobgoblins, lead by a Bugbear, sniffing around the trail. Rousing the other members of the party, they set an ambush and with a blast of lightening from Centari, destroyed the raiding party.

On the fifth day they arrived at the clearing where stood the Red Wizard's tower which looked abandoned.  Leaving some of the party and horses in the edge of the wood, Torvin and Wang explored around the perimeter of the tower looking for a secret entrance fearing that the front door, enhanced with magic, was trapped.  Thenus and Wolf searched the woods for some hidden passage that would lead to the tower while Centari contemplated how to get beyond the enchanted door.  With no other options but the front door, Centari dispelled all magic surrounding it, the door was kicked in and the party entered.

Walking down a long narrow hall, Wolf was attacked through murder holes in the passage by invisible foes.  Hurrying down the hall and into a plush chamber with floating candles, the party prepared themselves for battle as doors within the chamber opened and their Invisible Stalkers attacked.  Thenus was able to fire an arrow into one of the magical creatures that helped the party hunt it down but not before Wang fell dead.  Wolf and Minimus pulled one of the tapestries off the wall and tried to cover the invisible creature.  After a couple of attempts, they succeed and the party was able to kill the fiend.

Licking their wounds, they explore some of the rooms off the main chamber and find an armory.  Minimus only take some of the choice weapons out of there.  Beyond another door, Centari found a stone golem waiting to be activated.  Avoiding all of this, they headed up a flight of stairs into another plush parlor with fine tapestries and an ornate chess board. 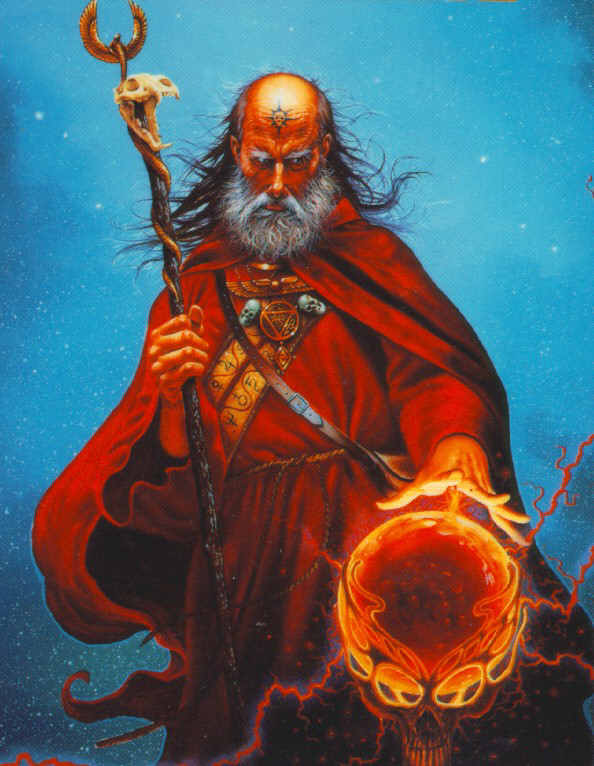 Wary of the chess board and thinking it might be a good idea for reinforcements after Wang's death, the party descended and left the tower for the woods and their friends.  This proved to be a fatal error as the Red Wizard happened to be standing upon the roof of the tower and spied the armed intruders leaving his abode.  After a shouted warning, the wizard sent down a fireball to wipe out the party. With the party scattered like ashes and badly wounded, some rushed back into the tower lead by Arg while Minimus and Centari battled the wizard with spells flying.

On the third floor they came to a magically locked door.  Liedrada, using her ESP learned that he Red Wizard was beyond the door waiting for them.  When the party tried to open the door, a hidden chamber opened and out stepped a Flesh Golem.  Minimus and Arg fought the creature until it lay dead.  A plan was formed that Arg, the party's most powerful warrior, would be cast in a sphere of silence, and, after, Centari would dispell the magically locked door, Arg would rush in and trap the wizard in silence while the others rushed in to attack.  This was a fine plan but, unbeknownst to them, the Red Wizard was reading their thought and prepared his defense.

After Centari freed the door, Arg kicked it open but the Red Wizard enchanted the mighty warrior who became a slave.  The Wizard sent the powerful Arg against his former teammates and he rushed down the stairs at them...

Posted by bliss_infinte at 3:00 PM No comments:

With a quick resurrection spell, Minimus raised (the un-killable) Skwanky from the dead, who, in addition to being quite pale due to his run in with the Soul Gem, is also charred black from the Centari's fireball attack as well as being a were-rat having been struck by a poison needle.

With the party all together once again and the were-rat's defeated and destroyed, they continued to explore the throne room of the still sizzling Rat-King.  Finding his bedchamber they also found an unlocked heavy oak chest.  After assuring everyone that the chest wasn't trapped, Wang Du opened the chest which exploded a puff of poison gas.  As everyone dove for cover, the Dwarf, who was occupied with the stonework of the chamber fell dead.

After letting the chamber air out, it was thought best to rest for the night and head back to town in the morning, against the wishes of Wang Du who wanted to continue to explore the rest of the tunnels.

With the party refreshed, Miniumus healed the wounded and brought the dead dwarf, Torvin, back to life.

Making their back way though the tunnels and back to their camp in the hills, they find a tied and beat-up Biggs who was left as a message from the ogres that the party had beaten up a few nights prior.  With their horses taken by the Ogres, the party used their raft to float victoriously back to Berkenstok.

The town is quite thrilled to have their drinking supply safe once again but there is concern that there is more afoot than appears.  However, the celebration is cut short over at the Hackyshack Inn when the party finds that another group of adventurers had explored Xlarthan's ruins, fought a dragon and returned with treasure and the magical Soul Gem!

There was much debate over the truth of this tale as our party, in the explorations in Xlarthan's ruins, had discovered not one but two dragons within the depths.  It was there that Skwanky had given the dragons the Soul Gem.  The new group insisted that they had fought only one dragon.  Wang Du laughed and insisted that there were two dragons and that the one living dragon will come to town and seek vengeance upon the town. This, of course, frightens the townsfolk, but the rival party insisted that there was only a single dragon.  This went on and almost came to blows but eventually it was put to rest with a wait and see attitude.  However, the argument then shifted as to who owned the Soul Gem.  Skwanky felt it was theirs since his friends were trapped inside while the rival party claimed it as they had found it after slaying a dragon.  It was decided to have the local wizard, Mystor, try to free Skwanky's friends and then afterwards, the rival party would keep the gem for themselves.

After a week of rest and recovery and wizardly research, Mystor had successfully freed Arg the half-orc, Wolfheir the Viking, and Torvin the cleric of the Black Church (who have been trapped in the Soul Gem since session 59).

Minimus, follower of Mithra, wished not to travel with Torvin of the Black Church as the two sects are currently at war with each other over the death of Baron Blackmore.  Minimus captures Torvin and throws him in the dungeon beneath the Berkenstok's church.

With their old friends back and the rival party their new friends, Mystor and Mayor Tubbutter talked with the party about dealing with the Red Wizard in the Grimmwood.  It was decided that the Red Wizard must be confronted for his attack on the town and that the two parties would unite to accomplish this.

The next day, the the last horses that the town could offer up, the extended party left Berkenstok, crossed the River Blackmore and entered the Grimm Hills seeking the Red Wizard.  The first night of their journey didn't go as planned as they were waylaid by  large party of roving bandits.  However, this proved fatal to the bandits as the veteran warriors of the party literally made mincemeat of those brigands before they even had a chance to retreat back into the darkness.

The rest of the night proved peaceful and the next morning the party left the hills and entered the Grimmwood...

Posted by bliss_infinte at 11:56 AM No comments: